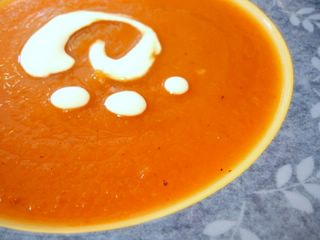 When I was abroad, at university in Sydney, I lived at a college that had a dining hall. I would not call the food haute cuisine, but it was included with our board. Sometimes the food was almost inedible. Sometimes it was laughably bad, when we could see both the original frosting and the chocolate frosting in a jelly trifle because the sponge cake was a third (or fourth) incarnation of something that had been sheet cake and lamingtons before.

One thing that the kitchen did really, really well was roasted pumpkin. Sometimes it was roasted butternut squash, but it was always delicious. The best part was that the next day, at lunch, we would get the leftovers as soup. It was just leftover pumpkin, water, salt and pepper, with perhaps a dash of nutmeg, pureed and served with sour cream and toast soldiers. It was my favorite, so I made a quick batch and pretended that I was back in Aus. Thankfully, I didn’t have to endure an awful jelly trifle for dessert!

What are cacao nibs?