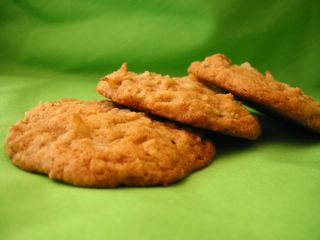 I have been wanting to make macaroons for a really long time, so I bought some shredded coconut and put it in the fridge, where it has patiently been waiting. And, as you may have guessed from the photo above, it never made it to macaroons.
These are Coconut Oatmeal Cookies based on a recipe from Maida Heatter’s New Book of Great Desserts. I bought the book a few months ago, soon after I discovered Cathy‘s Monday’s with Maida plan, but enjoyed her posts so much that I never actually got around to making any of the recipes myself! I have now read the cookbook several times, adding new flags each time in preparation for the day I would use it.
This recipe would not ordinarily have been my first choice because, although I love coconut, not many of the people I know do. Oddly, they like things I have made which contain coconut, but remain firm in their insistance that they do not like the texture/flavor/color of the fruit. The description won me over, though:

They are quick and easy drop cookies that are especially good. The recipe was sent to me as a gift from a bakery in Jacksonville, Florida, there they are baked in huge quantities (700 cookies at a time) are are so popular that the bakery runs out of them every day.

700 cookies a day? Whoa. That must be some cookie.
They were very easy to mix up. I had to slightly alter the recipe to account for the fact that I only had one stick of butter when I started to make them, so the original recipe has slightly more flour, a whole cup of butter and no milk, which I added for a little extra moisture in the dough. Even so, these cookies turned out to be incredibly addictive. They are crisp on the edges, slightly chewy in the center, buttery and flavorful. They taste like a particularly good oatmeal cookie and the flavor of coconut is distinct, but subtle and not overly strong. I would even go so far as to say that if you didn’t know there was coconut, you might not guess it was in there. Given their great taste (700 cookies a day!!!), I think everyone will like these. I know that I do.

Sift together flour, soda, baking powder, salt and cinnamon in a medium bowl.

Cream butter and sugars in a large bowl until well combined. Beat in vanilla, milk and eggs until light, about 2 minutes. Stir in flour mixture. Add oats and coconut.

Drop by tablespoonfuls onto a parchment lined baking sheet.

Bake for 11 minutes at 350F. Cookies will be lightly browned.

Let cool for a few minutes on baking sheet, then move to a wire rack until completely cooled.