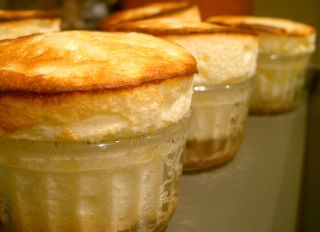 Sometimes you can afford to be a bit pretentious with your desserts. Souffles already have an aura of mystery, so why not throw in a dash of pretention? That’s how you get SoufflÃ©s Chauds au Citron in lieu of Warm Lemon Souffles? Just kidding. I like to keep it simple, so we’ll stick with the simpler name here.

I was never a huge fan of souffles. Often they’re too eggy, which is the case with many all-cheese souffles, or too heavy because someone has poured a cup of some sort of sauce into the souffle to mask the poor taste of the dish itself. Why even bother baking a souffle if all you wanted was a chocolate lava cake? I suspected that I must be missing out on something, as people generally seem to like these mile-high desserts, so I signed up and took a cooking class at Sur La Table in Santa Monica on souffles to find out.

The class was interesting. You have to be a little bit assertive with regards to the perparation, since for most of their classes you’re required to work in small groups. We made (and ate) Cafe au Lait souffles, Raspberry souffles, Chocolate Banana souffles – which my group was in charge of – and cheese souffles. I confirmed that I don’t really care for plain cheese, but I also realised that souffles can actually taste pretty good. They’re also easy, since you can prepare the base ahead of time and just whisk and fold the egg whites before popping them into the oven. Many people worry about the souffles falling, but once they’re out of the oven they’re supposed to fall. Trust me, you won’t surprise anyone if your souffle isn’t towering 12 feet over the dinner table. Just take your souffles out of the oven and serve them piping hot. Everyone will “Ooh!” and “Aah!” and enjoy – not only because they’re tall, but because they taste good.

This recipe is from Epicurious, but I’ll reprint it here. I used skim milk instead of whole milk to no ill effect. These souffles were just lemony enough without being either sour or overly sweet. If you happen to want something very sweet, use Meyer lemons instead of regular. Feather-light texture. I loved them.

Preheat oven to 400Â°F. Coat six 3/4-cup soufflÃ© dishes with butter and sugar.
Bring milk to simmer in medium saucepan over medium heat.
Whisk 1/4 cup sugar, cornstarch, and yolks in bowl to blend. Pouring very slowly, whisk in hot milk. Return mixture to saucepan over med-low heat and whisk constantly until it begins to thicken. Remove from heat. Whisk in lemon juice and peel. Cool. Cover with plastic wrap until ready to use.
Using an electric mixer, beat egg whites until frothy. Gradually beat in remaining 1/2 cup sugar. Continue beating until stiff but not dry (just a little beyond soft peaks, when the whites don’t totally ribbon down from the beaters). Fold 1/4 of whites into lemon mixture. Fold in remaining whites.
Spoon mixture into prepared dishes, dividing equally. Level with straight edge and wipe the rim of the cup clean.**
Bake until puffed and brown on top, about 18 minutes. Serve immediately.

**Note: This is a tip I got in the Sur La Table class. If your ramekin has batter on the edge, your souffle will rise unevenly. No one wants a slovenly souffle. Even if it does taste good.