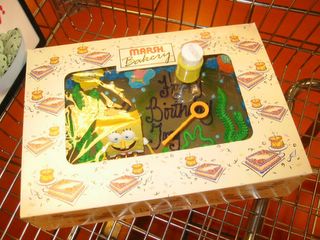 If you need to buy a cake for a man’s 24nd birthday, do not buy a Spongebob Squarepants birthday cake. There is something fundamentally odd about doing so – particularly when the birthday boy in question isn’t a fan of the cartoon and there is no “inside joke” about the cartoon that would give you a good reason for using it as a cake theme.

If you are picking up such a cake as a favor to a relative (who did not tell you what the cake was going to look like in advance), it is best to lie about the age of the recipient when conversing with the cake decorators in the bakery if the subject comes up.

If you have already said “There must be some mistake – this cake is for a 24 year old guy!” to the bakers, do not reveal your real name and try to leave quickly before their laughter reaches you.

What are moon cakes?