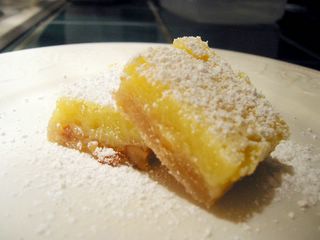 I’m going nuts! Actually, everyone is. I made some low fat lemon squares for Sugar High Friday #4: Let’s Go Nuts!

These lemon squares are from a book called Healthy Homestyle Desserts by Evelyn Tribloe that I picked up at a secondhand book store for $4 and chose not only beacuse the title was appealing, but the book is filled with great pictures. I made these over the holidays as a somewhat lighter alternative to chocolate and cookies. I hope my picture will tempt you to try these.
There is no butter in the crust, instead a buttermilk and oil are added. The recipe also called for using egg substitute, but I used egg whites and one whole egg instead. I also lightly toasted my chopped walnuts. I’ve included the nutritional information from the cookbook, but there is probablya bit more fat from that egg yolk (though probably a negligible amount as the information is per bar).
The great thing (besides the taste) about this recipe is that it takes an hour from start to finish, though your unburned taste buds will probably thank you if you wait for them to cool before digging in!

In a medium bowl, combine the flour, sugar, lemon zest and the walnuts. In a small bowl, whisk together the buttermilk and oil, then drizzle it into the flour mixture. Cut in using a fork until combined, then press the dough into the bottom of the pan. Bake for 15 minutes or until light brown on the edges.

While that is baking, prepare the topping.

Combine all ingredients in order listed and beat on high for 2 minutes with an electric mixer, until throughly combined. Pour over the baked layer and put the whole thing in the oven for an additional 20 minutes, until the center of the lemon topping is set.

Let it cool in the pan.

Slice into bars (recipe suggests 20, but I made 25 slightly smaller ones) and top with a sprinkle of confectioners sugar.

Nutritional information per bar: 86 calories, 2 grams fat (19% calories from fat); keep in mind that just about all the fat is healthy fat, from vegetable oil and walnuts. Now that is something to get nuts over.