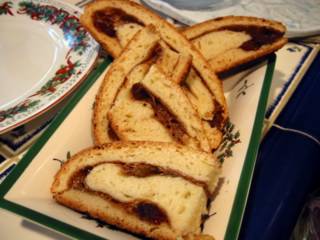 On Christmas, in addition to my marshmallows I wanted to make something to munch with coffee while my family and I opened our presents before breakfast. Often these pre-breakfast munchies take the form of coffee cake or cranberry-orange bread. This year I decided to try and make a babka in honor of my grandmother, whose family was originally from Eastern Europe.

I used this recipe for Cinnamon Chocolate Babka (minus the chocolate filling) from Dianna’s Desserts, but I won’t reprint it here because I wouldn’t make it again. While my grandmother liked the bread, I don’t think that it could properly be described as a babka. I feel that the filling should have been crisper and that the bread should have been more moist. That said, it did taste good but it wasn’t anything exceptional.

You may notice that the bread in my picture does not have a trational, upright babka shape. This is because I decided to bake it on a sheet pan instead of in a ring pan. Big mistake. The filling ran out all over the pan because I couldn’t manage to properly seal the ring. My meringue seemed to make the whole dough wet as I was rolling it up, which might be why I couldn’t get anything to stick together. Next time I will definately go for a ring or loaf pan.

Mediocrity is such a disappointment.