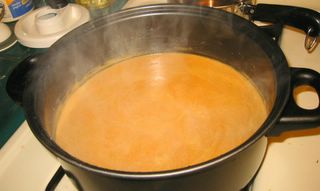 To serve with my lovely bread, I made a spiced pumpkin soup.
It had a really central american flavor due to the cocoa powder and cinnamon I added. I began with the Southwestern Pumpkin Soup recipe at Epicurious, but I didn’t really have any of the spices that it called for. Consequently, I am more then happy to take partial credit for the creation of this soup – which I will be adding to my favorite recipe file. Canned pumpkin makes this soup possible all year, especially now that stores seem to be stocking it year round (it was dangerously close to a seasonal item for a long time!).

Bring chicken stock and half and half to boil in heavy medium pot. Whisk in canned pumpkin, brown sugar and spices. Reduce heat to medium and simmer until soup thickens slightly and flavors blend, about 20 minutes. (Soup can be prepared up to 1 day ahead. Cool. Cover and refrigerate. Rewarm over medium-low heat, whisking occasionally.)

Serves 4, with some nice, crusty bread.