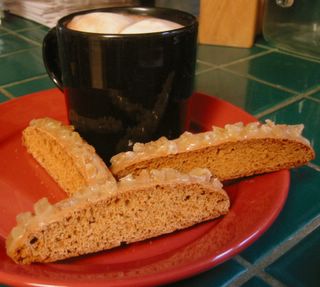 I adore biscotti. I am a bit disappointed with the trend towards softish, cakey biscotti, though. Biscotti should be very crisp. They should not, however, be so “crisp” as to require serious dental work after eating them. For these biscotti, neither is the case. I find them to be very crisp, yet light. They have no butter or oil in them (though I would put in a bit of olive oil if I were making a more savory biscotti).

I chose to make them for my Sugar HighÂ Friday entry instead of just submitting a classic apple pie recipe to go with the apple theme of the food blogging event. I happened to have a jar of apple butter and was keen to use it. I usually eat biscotti plain, but this time I topped them with a white chocolate almond glaze and sprinkled them with minced candied ginger. The only change I might recommend is to put the ginger in the biscotti before baking.

Preheat oven to 350.Combine dry ingredients in a bowl.

In a large bowl, whip eggs until foamy, then gradually add sugar. Beat until fluffy and thick, about 5 minutes. Â Add vanilla and apple butter to egg mixture.Add flour mixture to wet ingredients and stir until just combined. (Add in ginger here, if you wish)

Sprinkle baking sheets with flour.Flour your hands and shape Â½ dough into a log. Place log on baking sheet and flatten into a rectangle no more then Â½ inch thick. Repeat with remaining dough. Make sure your hands are well floured!Bake for 20 minutes at 375 until the edges begin to brown and logs are firm.Turn oven down to 325.Slice logs with a serrated knife into Â½ inch cookies and place (with the cut sides up) back in the oven.Bake for 40 minutes (or until dry), turning the cookies over after 20 minutes.
Makes about 4 dozen biscotti.

Heat cream and extract until quite warm. Melt chocolate. Combine and stir thoroughly until smooth. Spread thin layer on top of cooled biscotti. Top with candied Ginger to taste (I recommend a lot).