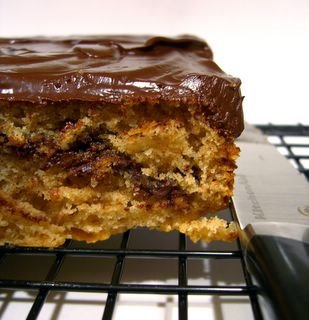 I was asked by Sara, from i like to cook, if I would be interested in trying a couple of recipes from Dorie Greenspan’s new cookbook, Baking: From My Home to Yours

, I immediately said yes. My general feeling is that no matter how many recipes or cookbooks I have (a lot is an understatement), I can always have more. Besides, new cookbooks mean new pictures, and I love flipping through books for ideas even if I don’t make anything.

To choose my first recipe, I looked at the ones that were illustrated first. I wish that they all could have had pictures, as the photography was excellent, but given that the book was already 500+ pages, it was understandable that they didn’t want to make it any longer.

My first choice was for a recipe called Cinnamon Squares, slightly renamed here because I think that Cinnamon Chocolate Squares is a slightly more accurate name. The recipes is for a cake with a cinnamon-coffee-chocolate swirl running through the center of it. It would be a coffee cake, but for the fact that it is topped with a rich chocolate glaze – not usually a feature of coffee cakes.

The cake is dead easy to make and you don’t even need to cream the butter, since it goes in melted. The only difficult part is spreading the second half of the batter evenly on top of the cinnamon mixture without disrupting it. Once it is finished, the cake is moist on the inside and very flavorful. The corners of the cake were a tiny bit crisp at the edge, so keep an eye on the baking time. I think that this would be great with a streusel topping, but the chocolate glaze seemed to be a real showstopper – people loved it. Overall, this is a great cake. Make it as dessert and serve it with coffee or add your favorite streusel topping and make it for breakfast.

Incidentally, my only negative comment about the book is that there are only about 5 recipes for yeasted breads, and for a book titled Baking I would have expected all types of baking to be covered, not necessarily just a focus on baked goods. Of course, I love baked goods and the book is still a good one, but it’s not necessarily the only cookbook you’ll want if you want to bake breads, too.

Cinnamon Chocolate Squares
(from Baking: From My Home to Yours

Preheat oven to 350F. Butter an 8-inch square cake pan and line the bottom with parchment paper.
In a small bowl, combine 2 tbsp sugar, 2 tsp cinnamon and the espresso powder. Set aside.
In a large bowl, whisk together flour, sugar, baking powder, the remaining cinnamon and salt.
In a medium bowl, whisk together milk, eggs, vanilla and slightly cooled, but melted, butter. Pour into the flour mixture and stir until just combined.
Pour half of the batter into the prepare pan, spreading it evenly over the bottom. Evenly sprinkle on sugar/espresso mixture and mini chocolate chips, then top with the remaining batter, spreading it evenly.
Bake for 35-40 minutes at 350F, just until a toothpick comes out clean. Let the cake cool in the pan for 15 minutes, then turn out onto a wire rack and remove the parchment. Let cool completely before frosting.

For the glaze, melt together the chocolate and the butter either in a double boiler (or on low power in the microwave, as I did) and stir until smooth. If it is runny, let it stand for a minute or two, but otherwise the chocolate should be thick, smooth, shiny and spreadable. Spread on the top of the cake (the flat bottom side should be facing up, which makes it easy to frost) and allow the frosting to set up before serving.