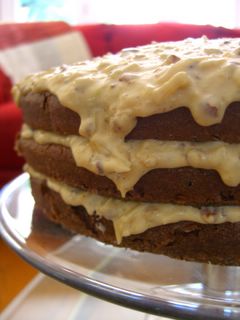 I hesitated about running the same picture twice in a row, but I promised to deliver the recipe, so there’s not much I can do about it. Besides, at the risk of sounding terribly immodest, I really like this picture.

As many of you guessed, this is indeed a German Chocolate Cake. Despite the name, the cake is thoroughly American and was invented in Texas, or at least, that is where the recipe was first published. The name comes from the fact that the chocolate cake made with a type of chocolate sold by Baker’s Chocolate Company called German’s Sweet Chocolate, named after an employee named Sam German in 1852. The cake recipe didn’t appear in print until 1957, but it has been a favorite ever since.

Eventually, the “‘s” was dropped and the cake simple became German Chocolate Cake. There is pretty much just one standard recipe for it, with slight variations. All produce a relatively mild chocolate-buttermilk cake with a really gooey, rich frosting that is thick with coconuts and pecans. The frosting is really too rich to eat on its own, so even though it seems like there is only just enough to fill and top the cake, as you eat you’ll discover that the amount is just right.

The cake is quite easy to make and very impressive to look at. The only tricky part is dividing the batter evenly into 3 pans. Instead of pouring directly into one pan, use a spoon of some kind to ladle out the batter until they are even, ensuring an even baking time. In my experience, no serious damage will be done to the third layer if it has to wait for the first two to be baked, if you have a small oven and cannot fit them all at once.

Preheat oven to 350Â°F. Grease three 9-in. round cake pans and line the bottoms using parchment paper.
Melt chocolate and water together in a large bowl, in the microwave or on top of a double boiler. Stir well and set aside to cool.
Sift together the flour, baking soda, and salt in a medium bowl. Set aside.
In a large bowl, cream butter and sugar together until light and fluffy. Add in eggs one at a time and then stir in the vanilla.
Add the flour mixture alternately with the chocolate mixture and buttermilk, working in three or four additions. Mix only until just combined.
Divide the batter evenly into the prepared pans and bake for 25-30 minutes, until a toothpick inserted into the center comes out clean and the cake springs back when lightly pressed. Cool in pans for 15 min., then turn out onto wire racks to cool completely, removing the parchment paper.

In a large saucepan over medium heat, stir together the condensed milk, egg yolks, and butter. Cook, stirring constantly, for about 10 minutes, or until thick and bubbly. Remove from heat and stir in the coconut, pecans, and vanilla.
Cool to room temperature (stirring to loosen, if necessary) and spread between cake layers and onto top of cake.