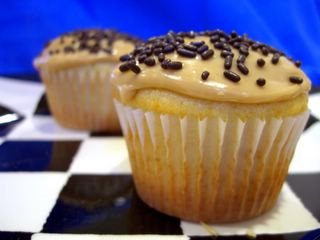 Praline is a Southern candy made with brown sugar and pecans. The confection has the unusual property that it melts in your mouth almost instantly after you bite into it. The icing on these cupcakes has the same flavor as praline. I didn’t include any nuts, but the icing really does melt in your mouth.

I first used this recipe, which comes from Cooking Light, a few weeks ago to make a layer cake and I enjoyed it so much that I decided to make it again. This time, however, I made cupcakes. The cake is delicious – moist and fluffy, with a lovely taste of vanilla and buttermilk. It is best with frosting and rather plain without it but it would probably be quite tasty with fruits if you are inclined to experiment a bit.

It is the icing that really makes this cake work, though. I added a smidge more salt than the original recipe called for, so it is incredibly addictive, with just enough salt to take the edge off the sweetness. It is a wonderful icing and, when paired with the cake, the combination is sure to please anyone eating it. I think it went particularly well with a cup of coffee, which helped to blend the flavors even more and cleanse the palate of excess sugar. I know that I will be using this recipe often in the future.

Oh, and try not to eat too much of the icing before you get all your cupcakes frosted. If you have some left over, I highly recommend dipping pretzels or potato chips in it.

Preheat oven to 350F. Line 18 muffin cups (you’ll probably need two trays) with cupcake wrappers.
Combine the sugar and butter in a large bowl, and cream together with an elextric mixer until light and fluffy, about 4-5 minutes. Beat in the eggs and egg white, one at a time, followed by the vanilla.
Combine flour, baking soda, and salt in a medium bowl and whisk to combine. Add the 1/3 of the flour mixture to the sugar mixture and stir well, followed by 1/2 of the buttermilk. Add in another third of the flour mixture, followed by the rest of the buttermilk and the last of the flour. Stir only until no streaks of flour remain.
Divide the batter evenly into the prepared pans, smoothing the surface with a spatula. Bake at 350Â° for 18-22 minutes or until a wooden toothpick inserted in center comes out clean and the top springs back when lightly pressed.
Cool completely on wire rack before frosting.

Combine the brown sugar, milk, corn syrup, butter and salt in a medium saucepan. Bring to a boil over medium-high heat, stirring to dissolve sugar. Reduce heat, and simmer for 5-6 minutes. Pour syrup mixture into a large bowl and let stand for about one minute. Add powdered sugar and the vanilla, then beat with a mixer at medium/high speed until smooth. Cool for 2-3 minutes (icing will be thin but thickens as it cools) before frosting, mixing for a few more seconds with the mixer to smooth it out.

Frost cupcakes and let them stand at room temperature until ready to serve so the frosting can set.