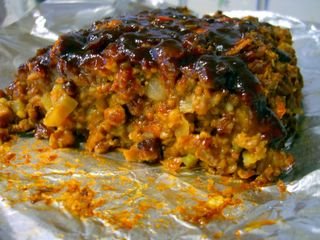 I really like Jennifer’s site Vegan Lunch Box, which hopefully you have all seen before via the link in my sidebar. Jennifer blogs what she packs for her son’s lunch everyday, dealing with the changing and occasionally idiosyncratic tastes of kids as well as the fact that they’re vegan and the other kids at school aren’t. To make sure her little “schmoo” isn’t left out, she sometimes gets quite creative with her lunch options, like vegan corndogs, homemade twinkies and vegan meatloaf.
Now, vegan meatloaf may sound like a bit of an odd concept, but I assure you that it can be a good one. And I know a think or two about meatloaf: my regular meatloaf won a contest.

I used an application that Jennifer created called the Magical Loaf Studio, which combines the ingredients of your choice into a meatloaf recipe, or rather, an un-meatloaf recipe. I’ve never tried an automatically generated loaf recipe and this seemed like as good a time as any to start.

I considered using black beans as my protein, but I ended up using a package of Yves Veggie Ground Round, which is a very tasty veg product that I’ve seen at Trader Joe’s and even my regular supermarket. I added a little bit more breadcrumbs than the auto-recipe called for, but overall I would say that the experiment was a huge success. It tasted great and was easy to do. I would describe it as juicy, meaty and very meatloafy. And my loaf made great sandwiches the next day, so I think that the loaf studio has the potential to generate some real winners.

Preheat the oven to 350F. Cover a baking sheet with aluminum foil.
Saute onion, garlic, carrots and celery in a large pan until tender, about 10 minutes on medium-high heat.
Combine vegetables, veggie meat, breadcrumbs, oatmeal and all spices in a large bowl and mix together. If it doesn’t stick together easily, add a extra tbsp or two of dry breadcrumbs.
Turn mixture onto foil-covered pan and pat into a rectangular loaf about 2-in. high.
Bake for 1 hour to 1 hour 15 minutes until loaf is slightly firm to the touch.
Let cool for 15 minutes before slicing.
Serves 3-4.