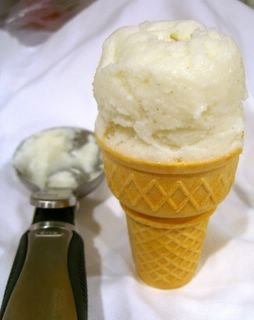 The only reason that this is called “sorbet” and not “ice cream” is the fact that there is no cream in it. Don’t let the name fool you, though, because it is still as cold and satisfying as ice cream, while having the unique flavor profile of buttermilk.
When I first saw the recipe in this month’s issue of Cooking Light, I knew that I had to make it. Not only did the original recipe have but three ingredients, but buttermilk is one of my favorite flavors. Interestingly enough, I never really cared for buttermilk growing up. I didn’t much like yogurt either, so I think that the slight tanginess I now love put me off somewhat. It’s a good thing I changed my mind. It imparts a rich, full flavor to baked goods, so I always keep it on hand.

The sorbet itself is smooth and slightly tangy. It is not as rich and creamy as ice cream, but it isn’t icy at all. It is light and melts quickly on the tongue. I added vanilla extract to my buttermilk mixture before putting it into the ice cream maker, which added another layer of flavor that I highly recommend.

Whisk together sugar, corn syrup and 1/2 cup buttermilk until sugar is dissolved. Stir in remaining buttermilk and vanilla. Pour into ice cream maker and freeze as directed (this took 15/20 minutes in mine). Place in freezer for 1 hour, until slightly firm, before serving.
Store in freezer in an airtight container.
Serves 4.