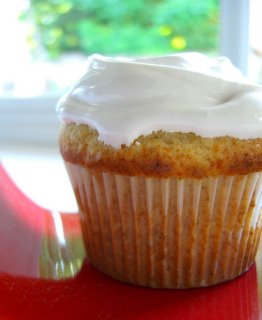 I couldn’t make up my mind whether to make peanut butter or banana cupcakes. Peanut butter seemed like it might be too heavy on its own, while banana sounded like it might be too sweet. I was looking for something light, wiht a nice flavor, when it occured to be to combine the two. Reflecting back on the decision-making process, it should have taken far less time to come to that conclusion that it did, but that’s beside the point now. What matters at the moment is that I have cupcakes.

In this case, the cupcake itself is tender and lighter than I would have expected, with a tight and even crumb, but a very fluffy texture. The batter comes together very easily. There are flavors of both peanut butter and banana, but neither is overly strong and they match each other perfectly. I used regular, creamy peanut butter, which means that there is a fair amount of salt already in it. I took this into account when I added salt to my recipe, but if you use unsalted peanut butter, increase the amount of salt to 1/2 tsp. The resulting cake has a hint of saltiness that perfectly compliments the peanut butter flavor and also allows you to use any kind of frosting without worring that you’ll overdo the sweetness.

Speaking of which, I also had a difficult time deciding what type of frosting to use. I ended up using a marshmallow frosting recipe that I love, though I can’t say that vanilla was the perfect frosting for these. If you want to really appreciate the peanut butter and banana flavors of the cake, eat them plain with a cup of tea or coffee and a dusting of powdered sugar. To play up the peanut butter, use this peanut butter frosting, and just use your favorite chocolate frosting if you need a chocolate fix and don’t mind hiding the other flavors.

Next time – and there will be a next time – I am going to add a touch of peanut butter and banana extracts (yes, those little bottles that you see in the grocery store) to this vanilla marshmallow icing. I mean, can it get any better than peanut butter, banana and marshmallow?
I think not.

Preheat oven to 350F. Line 16 holes of a cupcake tin with muffin liners.
In a small bowl, whisk together flour, baking powder and salt.
In a large bowl, cream together sugar and butter until fluffy. Beat in peanut butter. Add in the eggs one at a time, followed by the bananas.
With the mixer on low speed, beat in the flour mixture until just combined. Evenly distribute batter into 16 muffin cups.
Bake for 16-18 minutes, just until a tester comes out clean. The cupcakes will be very lightly browned.
Cool completely on a wire rack before frosting.
Makes 16 cupcakes. 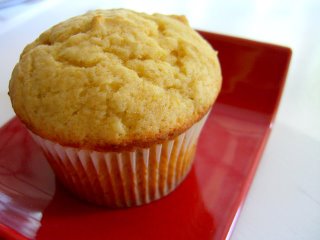