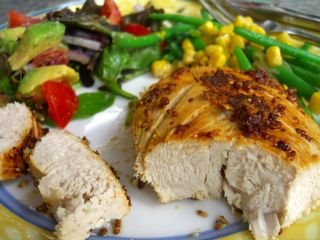 I was flipping through one of the newer issues of Everyday Food magazine, the quicker and easier recipe collection published by Martha Stewart, and was looking for something to make for company when I spotted the recipe for Mustard Crusted Turkey Breasts. As usual, the picture really appealed to me, as did the fact that the recipe called for whole-grain mustard

The coarse, whole grain mustard has a much more interesting texture than other mustards, since the seeds are still whole. It gives sandwiches and pretzels a bolder flavor than plain mustard. Of course, I’m still going to use the bright yellow stuff on my hot dogs, but it’s really a delicious thing to have around. It seemed like it would make a delicious compliment to turkey.

The problem with the recipe as it was written was that it called for a whole turkey breast, which I couldn’t find. I did find nicely sized turkey breast cutlets, however, which are about the size of chicken breasts. Since I didn’t have any skin to deal with, I decided to pan-fry the turkey instead of baking it. I did have some issues with oil splattering as a few of the mustard seeds popped, but by keeping the lid on most of the time, it was very minimal. I wouldn’t hesistate to do it again, but I don’t know that I’d attempt the recipe without a lidded pan.

The turkey was incredibly moist and the mustard paired perfectly with it. In fact, the mustard was so good that they turkey didn’t really need any other seasonings. I wouldn’t say that it formed a “crust,” but because parts of it were crisp and it was certainly coated in mustard, I’ll still give it the name. This recipe is a great twist on turkey and a good reason to eat it at times other than Thanksgiving. As you might imagine, the leftovers make great sandwiches, so consider throwing an extra cutlet into the pan if you have room.

Heat oil over medium-high heat in a large skillet with a lid. While the pan is heating up, spread the turkey cutlets with mustard, using about a tablespoon per cutlet. I find that it is helpful to lay them out on a plate, scoop some mustard over the top and spread it, then flip and repeat.
Lay the cutlets into the hot pan and close the lid. Cook for about 15-20 minutes, until the bottom is browned. Filp turkey and cook on the other side, until browned. Turkey takes a bit longer to cook than chicken, so the second side might take 15 minutes. The turkey is done when the center is no longer pink and the juices run clear. Check on the turkey periodically during cooking to make sure the mustard isn’t burning.
Serve immediately, with a big salad and your favorite vegetables.
Serves 4.