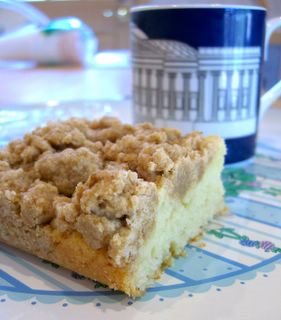 Crumb cakes differ from coffee cakes, though both often have streusel or crumbs component, because a crumb cake is mostly crumb. Sure, coffee cakes will have some on top or swirled throughout, but the bulk of the batter is cake. In this instance, the bulk of the “batter” was crumb.

The cake was a Martha Stewart recipe that I picked mainly on looks. Crumbs on top of a cake always look extremely appealing and promise to be buttery and sweet, crunchy and cake-like all at once. This one didn’t disappoint in any way. The cake was moist and tender and the crumb topping was crunchy and sweet, though not sugary, with a melt-in-your-mouth butteriness. The amount of cinnamon was just right.

That said, I did have a few small challenges when making the recipe. While mixing both the batter and the crumb mixture was very easy, the batter did not spread into the pan well at all! In fact, it only barely covered the bottom and I had such difficulty spreading it that I had to grease my silicone spatula to push it around. I still couldn’t get it into the corners, though the batter does spread and rise as it bakes, so this turned out not to be a problem in the finished cake. The main difference from the published recipe was that the cake took longer to bake than specified. Marth’s directions called for 20 minutes of baking time, while mine wasn’t done for about 28 minutes. Not that that is a big deal, since I used a cake tester to check it if was done, but a flaw nevertheless.

The cake can be served while still slightly warm, but it can also be cooled completely and stored, wrapped, for 2 days.

Preheat oven to 325F and grease and flour a 9×13 baking pan.
In a medium bowl, whisk together 1 1/2 cups flour, the granulated sugar, baking powder, and salt.
In a large bowl, whisk together the egg, milk, canola oil, and vanilla. Mix the dry ingredients into the wet ingredients and spread into pan (you might want to grease your spatula). Set aside.
In another large bowl, whisk together remaining 2 1/2 cups flour, brown sugar, and cinnamon (and allspice, if using). Pour melted butter over flour mixture, and stir with a rubber spatula until large crumbs form. Spread evenly over batter in pan.
Bake at 325F for 25-30 minutes, rotating once, until a tester comes out clean.
Cool completely on a wire rack before serving in large pieces.
Makes 12 servings.