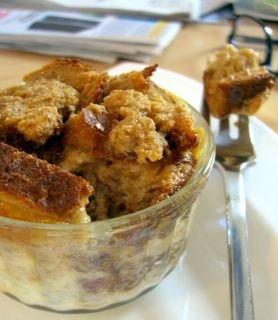 For this month’s Is my blog burning? event, Derrick from Obsession with Food chose stale bread as the theme ingredient. Now, this would make an exceptional theme for Iron Chef America because it would really challenge the chefs to try and come up with something different. How many different kinds of bread pudding could they make?

Actually, there are many things that you can do with leftover bread, but to take advantage of its naturally sponge-like qualities, I did something bread pudding like and baked some individual french toasts. They’re vey simple to make and an actually be done with fresh bread as well. You just tear up (or slice up) a few pieces of bread, toss them in some eggy batter and bake. The tops of the toasts get nice and crisp while the interior remains moist. I used whole wheat bread and left the crusts on, since it was a soft, sandwich loaf. The whole wheat gave it an extra layer of flavor and kept the dish tasting like breakfast-fare. You can certainly use a different kind of bread, if you like.

You can serve them directly from the ramekins, but you will probably want to place them on a plate, as the maple syrup you are going to use to drizzle over them just imight try to drip down the sides. The toasts can be prepared in advance and refrigerated overnight, though they make take a bit longer to bake in the morning. The test that they’re done, simply insert a sharp knife into the center of one of the toasts. When it comes out (reasonably) clean, they’re ready to eat.

Preheat oven to 350F.
In a large bowl, whisk together eggs, milk, maple syrup, salt and vanilla extract until frothy. Cut or tear bread into small pieces, about 1/2-1 inch big. Place bread pieces into milk mixture and press down to soak it all up.
Divide evenly into four 6-oz. ramekins and place ramekins on a baking sheet.
Bake for about 25 minutes, until a knife inserted into the center comes out fairly clean.
Serve immediately.
Serves 4.