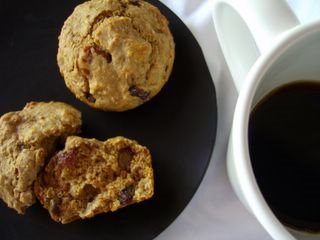 I have mentioned before that I am wary of bran muffins, because more often than not they just aren’t that good. They are overly bran-y, with a coarse, rough texture or they are practically dripping with oil, which neither improves the look or the taste of the muffin. I want bran muffins to be healthy and hearty, the sort of thing that you want to grab on your way out the door in the morning are still feel good about having done so at lunch.

This recipe is adapted from Sweet and Natural Baking, a book that uses natural sugars by concentrating fruit juice. I just use maple syrup when trying their recipes. These muffins also happen to be eggless and, since they were almost vegan already, I went ahead and used soy milk in mine. I liked the slight hint of vanilla from the soy milk and there was no soy-taste at all because of the fairly strong flavors in the muffin. You can definitely use plain milk, skim or whole, to make these.

The muffins are just sweet enough have a soft texture with a nice, wholesome flavor that is a combination of maple syrup and cinnamon. Since I didn’t use muffin liners, the edges of the muffins were slightly crisp when they were just out of the oven. They don’t have a coarse texture from too much wheat bran and they aren’t oily in the least. They are actually quite low in fat. The only thing about these muffins is that they really are best on the day that they are made. The second day, even if wrapped, they will be on the dry side. If you’re planning to make them are than a day ahead, you’ll probably have to slather them with butter or jam. Not that there’s anything wrong with that, of course.

Preheat oven to 350F. Grease 10 cups of a regular muffin tin.
In a large bowl, mix together flours, wheat bran, baking soda, baking powder, salt, cinnamon and nutmeg.
In a small bowl, whisk together maple syrup, milk and vegetable oil. Pour into flour mixture and stir until just combined. Stir in raisins.
Distribute evenly into 10 greased muffin cups.
Bake at 350F for about 15 minutes, until a tester comes out clean.
Makes 10 muffins (not 12)