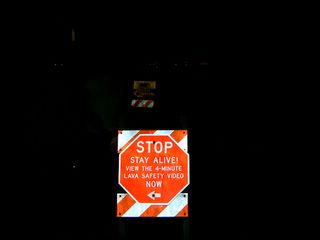 I set my alarm for 2:30 in the morning, after packing my bag with water, flashlight, camera, sunblock and granola. I definately didn’t get enough sleep that night, but then, neither did anyone else.

When the alarms sounded, we quickly dressed – warmly and in layers – before piling into our rented car and driving the 45 minutes out to the beginning of the lava field. Predictably, the empty parking lot was full of signs warning about the hazards of what we were about to do, to say nothing of the fact that it was pitch black outside. Nevertheless, we headed out into the recent lava field, along the coast at the southern edge of the Big Island, to get close to the fresh, still-flowing lava.
The “trail” is vaguely marked with plastic traffic cones. Hardly a safe activity – so it is understandable that the park service does not want to be overly encouraging about making the trek – the park service would not be bankrupted by the use of a few more cones to guide by. They were all approximately 1/4 mile apart in a vast, black expanse of ridges and gullies; guesswork and a good sense of direction, for there are no maps, are the best way to navigate the field. The ground itself was rough, uneven and crumbling in places. It was necessary to war gloves because the hard, old lava cut like broken glass and, particularly in the dark, the route was treacherous. Flashlights must be trained on the ground directly in front of you to avoid tripping or turning an ankle if you do the hike in the dark.

Though the hike is over two miles on most days – it can vary with the direction that the lava flows – it took more than two hours to reach out destination. The air was hot and sticky, and the ground radiated heat as though it were a living thing. The smell of sulphur was strong and made the eyes water slightly, but it was hard to distinguish the source of tears when the sun rose above the horizon just as we arrived at the outskirts of the fresher flows. To describe the views as magnificent would be a complete understatement. 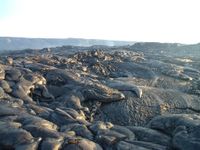 The fresher ground was smoother than at the beginning of the hike and almost delicate in places where it the ground was dry. Other spots were terrifyingly malleable. The discovery of a cavern looking down into the fresh, molten rock was both exhilaring and terrifying, as it meant that were were separated from thousand degree temperatures by only a few feet of rock.

Rather unwisely, this is where we rested before finally turning around to head back.

It was significantly easier to navigate the return hike since it was no longer pitch black outside, though the hike was hardly shorter. It was astonishing to see some of the more intricate patterns along the ground, previously unseen in the dark, as we struggled over the seemingly endless succession of sharp, black hills. Towards the very end of the trip, as we came closer to the unmanned ranger station, we passed a pair of people just beginning their journey. When they asked how far it was, I replied, “Far. But it’s worth it.” 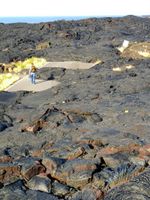 We returned from the fields just in time for breakfast at the Country Goose Bed and Breakfast, where we were staying in one of their rental homes. The homes are beautiful and comfortable, while the proprietor, Joan, is friendly, helpful and a wonderful cook. It was just as well that we had made it back for breakfast because Joan was serving up hot Belgian waffles, with heaps of fresh fruit and whipped cream. And the only thing we wanted more than a shower was breakfast. The waffles were crisp, golden and immensely satisfying, while the accompanying papaya and fruit salad was refreshing. It did seem a bit odd to be conversing with other people who had just woken up when it seems like we had just had a full day, but the thrill of the hike was still wearing off and we simply smiled, ate and recommended that others try the hike as well…. 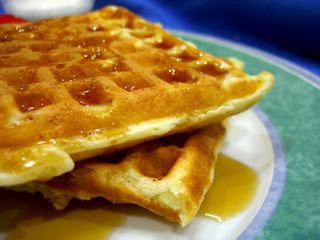 I debated for a long time what I should make for Reid and Alan‘s Virtual Vacation Contest. Sifting through vacation memories is easy, but sometimes it is that bad food experiences, rather than the good, that stick out in your mind. For example, when I was 16, I went for lunch in what I believe was a butcher shop in Spain, with a group of friends. The walls of the dining room/restaurant were entirely hung with ham, floor to ceiling. We were served a seafood paella that was overflowing with everything from shrimp to octopus. Between disturbing visuals of the tentacles on my plate and the ham mere inches from my head, combined with the overpowering odor and summer heat, I had to leave the restaurant. As I recall, I went to McDonalds for a coke and air conditioning after that.

Other memories are more about the place than the food. I love a particular coffee shop in Mammoth Lakes, California because I love the mountains. I remember visiting an ice cream shop in Nice where I learned what the word “chantilly” meant, but mostly was glad to have arrived safely after having been in the car with a crazy French driver. I’ve blogged about memories from Australia, though time there couldn’t really be considered a vacation.
Instead, I picked a fairly recent vacation.

I always love visiting Hawaii and don’t think I’ll ever get tired of the gorgeous scenery, excellent food or friendly people there. Plus, there are always new things to try. While these waffles may not be the same as the ones I had that memorable day, they are excellent. Light, fluffy and delicious. Keep them crisp by putting them in a warm oven until serving, or just eat them hot off the waffle iron, as Joan serves them. Top with whipped cream or, as I prefer, with syrup and fruit. 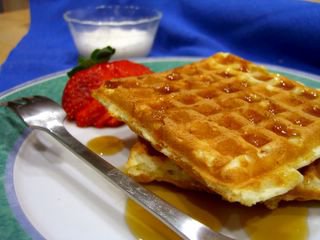 Preheat waffle iron.
Whisk together flour, baking powder, baking soda, salt and sugar in a large bowl.
In a large measuring cup, lightly beat together buttermilk, milk, eggs and butter. Pour into flour mixture and stir only until just combined. Batter should be lumpy.
Use a 1/4 or 1/3 cup measure to “blob” batter into the waffle iron, lightly grease yours if it requires it. Cook as directed.
Serve hot off the grill.
Serves 6-8

Iâ€™ll tag this entry for SHF, too, as you can serve these as breakfast in bed, not only after a 4+ hour hike through a lava field.