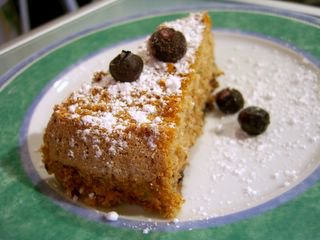 I read quite a few food magazines every month. Given that I also have a fair number of cookbooks, recipes from other blogs and recipes that I either make up or have ideas for, I have accumulated quite a backlog of recipes and a magazine recipe has to be pretty appealing for me to bump it up in the queue. I picked up a copy of Healthy Cooking magazine recently, though, and there were a few things that caught my eye. I’m sure it didn’t hurt that the issue was packed with holiday dessert recipes. Rum raisin rice pudding? Chocolate muffins? Yum.

This recipe isn’t a dessert recipe, though. With blueberries and pecans, the coffee cake has some of my favorite ingredients. It looked and sounded like it would be light and tasty, with a very appealing nutritional profile, too.

As it turns out, I’m certain that the nutritional information given in the recipe is incorrect, unless they’re using some fort of reduced-fat pecans that they don’t sell out in my neck of the woods (though I would surely try them if they did). No matter, since the cake tastes great and is still quite healthy. The cake has no butter or oil added to it, getting its fat from nuts and eggs and making it quite similar to a sponge cake. It is fairly moist and has a lovely, crispy edge. I adore the combination of blueberries and pecans, but I wish that some of the berries had remained suspended in the batter, instead of sinking to the bottom. Next time, I’ll toss them in flour first. If your nuts aren’t ground quite fine enough, the texture will be a tiny bit rough, but no less delicious. The original recipe actually called for adding cornmeal to the batter, but I completely forgot to add it. I think this turned out for the best, as adding something with that much texture (coarseness) would not have improved the cake.

If your pecans are not already ground, toast them and grind them in the food processor with a tablespoon of sugar to help prevent them from getting pasty. Measure 1/2 cup after they have been ground, not before.

Preheat oven to 375F. Grease and flour an 9-inch round cake pan.
In a small bowl, whisk together flour, baking powder and salt. Set aside.
In a large bowl, beat together pecans, sugar and one egg, adding the remaining egg and egg whites one at a time, until the mixture is smooth. Add vanilla and beat on high for 1-2 minutes, until slightly lightened. Beat in flour at low speed.
Toss berries in a teaspoon or two of flour, then fold into batter. Pour into prepared pan.
Bake at 375F for 40-45 minutes, until a tester comes out clean.
Let cool for at least 15 minutes before slicing. Serve with a dusting of confectioners sugar and more berries, if desired.
Makes 12 servings.

(Note about nutritional information: The recipe claims that each slice of the cake has 54 calories and 1 gram of fat, which isn’t possible due to the fact that 1/2 cup ground pecans will have approximately 40 grams of fat. Pecans are, however, very low in saturated fat and at approximateloy 134 calories and 4-5 grams of fat per slice of cake, this is still a pretty healthy breakfast or snack choice.)