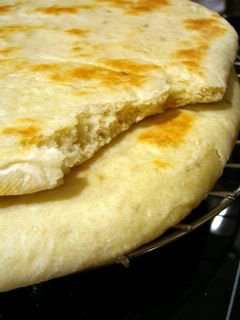 I went back to a Paul Hollywood recipe for this week’s Cooking School. I’ve mentioned before how much I admire him and love his recipes, so often I’ll turn to his book, 100 Great Breads, when I’m looking for inspiration. This week I chose to make a favorite flatbread of mine: naan.

Naan is a traditional Central and south-East Asian bread that is baked in a special oven, called a tandoor. It is typically made with flour, water, yeast and yogurt, which gives it its traditionally soft texture. It is a bit similar to pita bread, if you have never had naan and are looking for something to compare it to.

Paul Hollywood’s recipe is different from most because he calls for pan frying the bread instead of baking it. He also doesn’t specify the exact amount of water needed for the recipe, so I made sure to measure as I went along to help any of you (readers) along. Paul includes cumin and carraway for seasoning, which contribute a hint of flavor that makes this bread perfect for pairing with savory dishes. Normally, I would recommend some sort of curry or saucy dish to dip the bread in, but it also functions as an excellent dipper for soups. This naan is fluffy on the inside wiith a nice chew to the outside.

hough it was not quite as light as some oven-baked naan I’ve had, it was stillÂ excellent. The fact that it was incredibly easy is just an added bonus.

In a large bowl, stir together flour, yeast, salt, cumin and carraway seeds. Add water and stir until a soft dough forms, pulling away from the sides of the bowl. Add an additional tablespoon or two of water, if necessary.
Working within the bowl, knead dough until smooth and elastic. Divide dough into three balls and place on a large sheet of parchment paper. Let stand, uncovered, for 1 hour (add 15 minutes if room is chilly).
Roll dough out into 10-inch rounds. Let rest for about 5 minutes.
Spray or brush the bottom of a large skillet thoroughly with olive oil and heat over medium-high heat. Cook each naan until browned, about 5 minutes, before turning to brown the other side. Serve warm.
Makes 3 large naan.