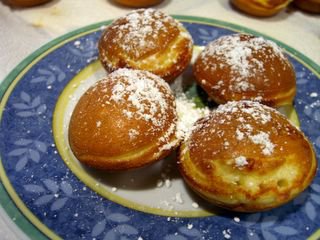 Aebleskiver are a Danish delicacy, a type of small, round pancake or waffle, with somewhat crisp exteriors and very moist interiors. They usually have small slices of apple inside them, but they can also be filled with jam or left plain. The are best eaten with powdered sugar, in my opinion, but syrup and jam are popular, and they can be rolled in butter and a cinnamon-sugar mixture to create small doughnut-like confections.

You need a special pan

to make aebleskiver. They are generally cast iron and have small, semi-spherical indentations to hold batter and give the cakes their unique, round shape. Aebleskiver are cooked on the stovetop and flipped over halfway through cooking. I use a fork to flip mine, but it is more traditional to use a large wooden skewer or knitting needle. These aren’t the most versatile of pans – probably best for aebleskiver (obviously) and perhaps even donut holes – but they are rather fun-looking. And aebleskiver are so easy to make that you’ll get your money’s worth out of the pan.

I based my recipe on one that came with my pan, just to stick as close to an authentic recipe as possible. I added cinnamon to the batter and filled them with raspberry preserves. They were amazing – soft, fluffy and with a lovely sweetness. I would put them half way between pancakes and donut holes (jelly donut holes, of course)! I’ll be using my pan a lot more after today.

In a large bowl, beat egg yolks and sugar until sugar is dissolved. Add vegetable oil and milk and mix well. Stir in salt, baking powder, cinnamon and flour.
In a small bowl, beat egg whites until soft peaks form. Fold into flour mixture.
Heat aebleskiver pan, brushed with a bit of vegetable oil, over high heat until hot. Fill each indentation about 3/4 full with batter. When the cake begins to puff up, add about 1 tsp raspberry preserves. When the batter bubbles slightly and the bottom is golden, turn over by inserting a fork (or skewer) into the edge and flipping quickly. Cook until the whole thing is golden brown. The aebleskiver will take about 2 minutes on the first side and 1 minute on the second side.
Keep in a single layer in a slightly warm oven until serving, if not serving immediately as they cook. Serve with powdered/confectioners sugar.
Makes 28 aebleskiver.