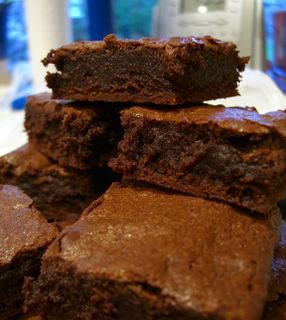 Too cakey, too dry, too dense, too wet, too greasy, too many nuts, not enough nuts.

What is the perfect brownie? I sincerely thing that everyone has a different mindset when it comes to brownies. Some people like them to be like a moist, dense, chocolate cake, while others prefer them to be a sort of lightened fudge. There are some who won’t eat them if they don’t have nuts or frosting, while others turn up their noses at anything but a plain brownie. For something so simple, there are nearly as many different recipes as there are tastes. Unfortunately, I have found it very difficult to come up with a basic brownie recipe I actually like. I have tried so many brownies, I can no longer even identify the traits that I thought I liked, though I now know exactly what I dislike in a brownie (hence the list at the top of this post).

IÂ am so picky about brownies that I will nearly always refuse them. But I was flipping through my new copy of Alice Medrich’s Cookies and Brownies

and saw her recipe for New Classic Brownies. Not only do I trust Alice’s recipes, but I noted that these involved a “different and rather magical” technique. Alice said that this brownie recipe, coupled with the magical technique, “won hands down against the same recipe baked in a conventional matter. Not only was the crust crustier and the center creamier, but the flavor was livelier and more chocolatey as well!”

The magical method involves baking the brownies at a hight temperature for about 20 minutes, then dunking the pan in an ice bath, which arrests the cooking from the outside in, and very quickly at that. You can, alternatively, shove the pan into your freezer immediately upon removing them from the oven. If your freezer looks anything like mine, you’re probably better off with the ice bath. This method means that you must use a metal baking pan, since a glass one could shatter when you take it from a hot oven and plunge it into freezing water.

This works. The brownies are the best brownies I have ever had, hands down. They are smooth and creamy in the center, without seeming raw or underbaked. They are crisp on the top and firm rather than gooey on the bottom, making them easy to handle. They are rich but neither greasy nor overly dense and fudge-like. I think that they are quite possibly the perfect brownies. These will be my basic brownie recipe from now on. You can add up to 2/3 cup chopped walnuts or pecans to the batter, if you like.

Preheat the oven to 400F and line and 8-inch square metal baking pan with foil.
Melt the butter and the chocolate together, on top of a double boiler or in the microwave, stirring often until smooth. Stir in sugar, vanilla and salt. Add eggs one at a time, followed by flour. Stir until very smooth, about 1 minute. Add nuts, if using.
Scrape batter into prepared pan and bake at 400F for 20 minutes.
Meanwhile, prepare a water bath. Fill a large roasting pan with water and ice about 1 inch deep.
When the brownies are done – and they will look a bit dry on top – take them immediately from the oven and place in the water bath. Add more ice to the water if necessary. Allow to cool completely in the bath before removing the pan and cutting the brownies.
Store in an airtight container for up to 3 days.
Makes 16.