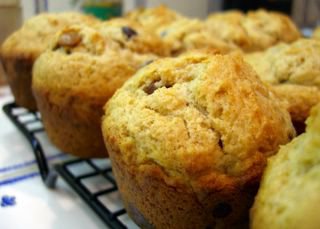 There are a few tricks to baking a bakery style muffin. By “bakery style muffin” I mean a muffin that has a slight crispness to its muffin top, is moist and fluffy inside and is exactly halfway between being coarse and being cake-like. Most importantly, a bakery style muffin has a big, domed top taking up about 50% of the muffin. Kelli, from Lovescool, and I have been pondering the all important question of how to achieve this.

The main thing in achieving a stable, domed rise is to have a thick batter leavened with baking powder. Yogurt is what makes the batter so thick in this recipe. Baking powder will give the muffin plenty of verticle lift, while a muffin leavened only with baking soda would spread a bit, tending to have a flatter top. Overfilling the muffin tins, by which I actually mean coming up to the top of the tin or slightly higher with the batter, will let these muffins have a nice crisp ledge, like a bakery muffin. You can see that I didn’t overfill mine quite enough; the ledge is quite small in the photo.

Moisture comes from butter, sugar and eggs. The editors of The Best Recipe

, which this recipe is taken from, tested the exact amounts of butter and sugar to perfect (in their opinion) this muffin. I increased the sugar from “One cup minus one tablespoon” to “one cup” because it’s simpler. Having only one cup of sugar in this recipe prevents the muffins from being too sweet and cakelike or taking focus away from the flavors in the muffin. The creaming method ensures a tight and fluffy interior crumb in these.

The muffins turned out exactly as promised: domed, beautiful and very bakery-like. They tasted great, with a firmer edge and moist interior. You can add 1 1/2 cups of fruit (fresh or frozen) to the batter, much as Elise has done with her Blueberry Muffins, based on the same recipe. I added some cinnamon and 1 cup of chocolate and cinnamon chips instead. Served warm and with a bit of butter, they were very delicious, though I migh go for a cherry/chocolate combination next time….

Preheat oven to 375F and grease a 12 cup muffin tin with cooking spray.
Whisk flour, baking powder, baking soda, salt and cinnamon together in a medium bowl.
Cream together butter and sugar in a large bowl, adding eggs one at a time. Beat in vanilla.
Alternate yogurt and flour into butter mixture, ending with the flour and working in 2 or three additions. Stir in chocolate and cinnamon chips.
Divide batter evenly among muffin cups, filling them to the top or slightly higher and bake for 20-25 minutes, until golden brown and a tester comes out clean (Note: with fruit instead of chocolate chips, you may have to increase baking time by a few minutes).
Cool on a wire rack.
Makes 12 large muffins