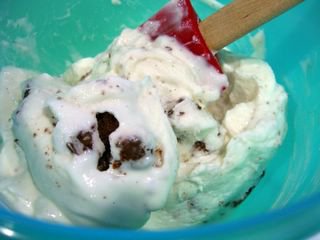 I am a big fan of frozen desserts, but as good as ice cream is, it can actually be a bit rich for me at times. I prefer it when the weather isn’t quite so hot, since its creaminess actually makes me incredibly thirsty. It’s good to drink lots of fluids on a hot day, of course, but I don’t want to get thirstier when I am looking for some refreshment! Instead, I’ll opt for gelato and frozen yogurt on hotter days, since they seem a bit more refreshing.

The only negative of frozen yogurt and gelato is that they don’t usually come with all the various extra add-ins that ice cream does, like peanut butter swirls, chocolate fudge ripples or cookie dough chunks. They have toppings – and those just aren’t the same as something that is incorporated into the dessert itself. The easy solution to this was to, of course, add my own in.

I have a recipe for frozen yogurt that I am a big fan of. It’s sweet and creamy, with that slight tang from the greek yogurt that I use. It’s usually a struggle for me to resist eating it until after its been through my ice cream maker. But I’m always rewarded for my restraint.

After taking this batch out of the ice cream maker, I folded in some chopped up, frozen brownies. If you’re thinking that you won’t be able to restrain yourself when you have made a particularly good batch of brownies, don’t worry. The brownies I used were leftovers from a less-than-perfect, rather cakelike batch that froze suprisingly well. Not only do they actually taste better frozen, they keep for ages, just waiting to be added to things like frozen yogurt. But if you can set aside a few of the good ones, by all means do so. Take note that it is better to fold the chunks in once the yogurt is semi frozen, as the ice cream maker will break them up too much.

Do I really have to say what a fantastic combination this is?

If you don’t have an ice cream maker, you can simply pour the unfrozen yogurt mixture into a bowl, cover it with plastic wrap and stick it in the freezer. If you give it a good stir every 45 or 60 minutes, it will turn out quite well. The greek yogurt, again, is thicker than most ordinary yogurts, so I urge you to strain your yogurt for at least and hour or two over cheesecloth if you cannot find a thick yogurt at your local market.

Whisk vanilla into yogurt until it is smooth and set aside.
Beat egg whites until they nearly reach soft peaks, then add sugar gradually while beating at medium-high speed until you have soft peaks and the sugar is dissolved, 4-5 minutes.
Fold yogurt into egg whites in 3 0r 4 additions, making sure it is very well incorporated. Pour into your ice cream maker and freeze as directed (or without an ice cream maker, as described above). Fold in brownie chunks.
Store in an airtight container in the freezer if not eating it right away.
Serves 4.