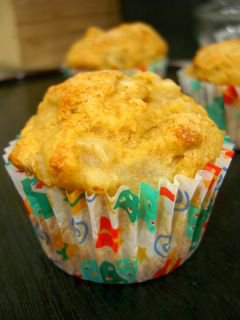 Pears are funny fruits. Much like bananas, when you have a group of them, they seem to ripen all at the same time. Unlike bananas, they also have a very short window in which they are perfectly ripe, firm but yielding to the touch. I frequently get pears as gifts, particularly this time of year and as I can’t seem to resist buying them in fairly large quantities when the price is right, I will occasionally be forced to eat many pears in a day or two. Poor me.

Once in a great while I will tire of eating pears plain and begin to hunt around for something to do with them. Pears and cheese, pears in soup, pears in my oatmeal, pear sauce. I don’t usually add pears to my baking because they don’t hold up as well as firmer fruits, like apples, but a recipe from Everyday Food caught my eye. Unfortunately, I didn’t have any granola for the topping and and wasn’t going out to get any. I ended up reducing the baking time and temperature, but making similar muffins.

Before I bit into one, I worried that I hadn’t put enough spice into these muffins. As I tasted and chewed, I completely forgot about the spices. These muffins managed to taste just like my pear clafoutis, less custardy by default, but strikingly similar. The pears were soft and gave a lot of moistness to the muffin. The relatively delicate flavor of pear was strong, which I loved. There simply aren’t enough pear-flavored things.

Preheat oven to 375F. Line a 12-cup muffin tin with baking cups.
In a large bowl, whisk together flours, baking powder, salt, cinnamon and ginger.
In a medium bowl, cream butter with brown sugar. Beat in eggs one by one, followed by yogurt. Pour egg mixture into flour mixture, stirring until just combined. Mixture will be thick. Add pears and stir just until well distributed.
Fill muffin cups evenly with the mixture. Each cup should be quite full.
Bake at 375F for 17-20 minutes, until a tester comes out clean.
Cool on a wire rack. Serve warm or cold.
Makes 12 muffins