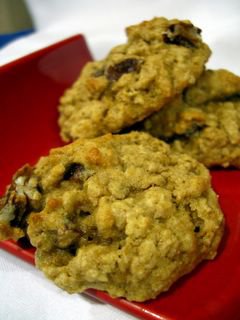 These cookies come from a good combination of fall flavors, though it is nearly the start of winter. They combine maple, cinnamon and pecans with my favorite cookie ingredient: oatmeal. The maple comes from maple syrup. I generally keep grade B on hand, since I prefer its darker flavor and slightly more syrupy consistency to higher grades.

The highlights of these cookies are the pecans I used. I bought a bag of cinnamon spiced pecans at Trader Joes, which seem to be roasted pecans with a thick coating of cinnamon. They are spicier and much less sweet than candied pecans, but are possibly even more addictive. Normally I wouldn’t use chunks of pecans as my only cookie “add-in”, but these are so flavorful that I couldn’t resist.

I definately thought of autumn when I tasted these. The maple flavor was subtle, but present, and the pecans were a standout. Resist the temptation to add vanilla to these because it could overwhelm the other flavors. Candied pecans will work as well, but keep your eyes out when you are in the store for other sweet spices. You can always make your own, as well. These were a nice change from regular oatmeal cookies, flavorwise, but they still had a nice softness and a crisp edge.

Preheat oven to 375F. Line a baking sheet with parchment paper.
In a small bowl, whisk together flour, cinnamon, baking soda, baking powder and salt. Set aside.
Cream butter and brown sugar together in a large bowl. Beat in maple syrup and egg. Stir in flour mixture and oats, adding pecans at the last minute. Stir only until just combined.
Drop by rounded tablespoonfuls onto parchment lined baking sheet.
Bake at 375 for 9-12 minutes, until set and golden brown around the edges.
Makes about 2 dozen.

And before I forget, I just want to say thank you to everyone who voted for my Rooibos Raisin Rolls in last month’s TeaChef contest. They were the winning recipe!