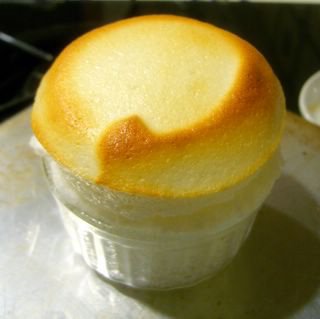 For me, almost anything paired with citrus makes a winning combination and I have been on a citrus kick for the past two weeks. Maybe it will pass and maybe it won’t, but I’m certainly going to enjoy a good thing while it lasts.

Combining the two main components of last week’s Lemon Meringue Pie, curd and meringue, I made some simple Lime Souffles this week. The recipe is a slight adaptation of a Donna Hay recipe, from her book Modern Classics 2

. Though the name makes it sound like a sequel, it is actually the sweets volume of her two-part Modern Classics set. This book covers everything from cookies to cakes to puddings, including souffles.

This recipe, given in the book as a Lemon Souffle, is used by Donna to liiustrate a basic souffle. A simple syrup mixture is thickened with cornstarch and, once cooled, is folded into beaten egg whites. The total active cooking time is less than ten minutes, including juicing a few limes and beating the egg whites, though the lime base does need to be prepared in advance and given a chance to cool to at least room temperature. It can be kept, covered, in the refrigerator if you want to make it a day or two ahead.

There is no fat added to this souffle and the tartness of the lime cuts cleanly through what turns out to be the softest cloud of fluffy souffle. I am not sure that I have had a souffle with this even and delightful a texture before, but I will definately be making it again, both with lemon and possibly even orange. I think that this is a great souffle to test your skills with because it is so easy and, tastewise, so rewarding.

butter and sugar, for greasing the ramekins

In a small saucepan, whisk together lime juice, 2 tbsp water and 2/3 cup sugar. Bring to a boil. Meanwhile, throughly combine 1 tbsp cornstarch with 1 tbsp water in a small bowl. Whisking constantly, pour into lime syrup and continue cooking for 1 minute, until slightly thickened. Transfer to a medium bowl, cover with plastic wrap and refrigerate until cool.

Preheat oven to 350F.
Butter six, 6-ounce ramekins and coat them with sugar.
In a large bowl, use an electric mixer to beat egg whites until foamy. With the mixer on high speed, stream in the remaining 1/3 cup sugar and beat to soft peaks. Stir 1/4 of the egg whites into the lime mixture to lighten it. Pour lime mixture into the large bowl with remaining egg whites and fold gently until thorougly combined.
Distribute mixture even between ramekins, making sure each souffle is level. Use your finger to wipe the rim of each ramekin, which will ensure a clean rise.
Place on a baking sheet and bake for 12-15 minutes, until souffles are a light golden brown.
Serve immediately.
Makes 6.