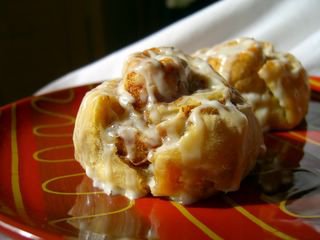 Every month, Adagio Teas has a TeaChef contest. When you sign up, they’ll send you a free sample of the month’s featured tea, which you can use to create an original recipe. The recipes are submitted back to the site and, at the end of each month, you can vote for your favorite recipe to win. The prize? Something tea-related and the honorary title of “Best [Tea] Chef in the Universe”. Frankly, I’m in it for the title.

This month’s tea is here, along with all the other entries.

This is a variation on my rolls that was really quite tasty. Try these as cinnamon buns or try the base recipe for the rolls alone, if you have a chance. Regardless of whether you will try them or not, please head over and vote for my entry! The voting button is just under the photo.

Bring water to a boil and stir in tea. Let steep for 7 minutes, strain leaves and let water cool until it is just warm to the touch, 100-110F.
In a large bowl, combine 1/4 cup of the warm tea, yeast, honey and melted butter. Stir together and let stand for 10 minutes, until foamy.

Stir remaining tea, salt, 2 cups of flour and raisins into yeast mixture. Add remaining flour one tablespoon at a time, stirring until the dough comes away from the sides of the bowl. You may not need all the flour, but if you need to add a bit extra, that’s fine. Turn dough out onto a lightly floured surface and knead until smooth and elastic, about 5 minutes. Place in a lightly oiled bowl, cover with plastic wrap and let rise in a warm place for 1 hour, or until doubled in size.

Turn risen dough out onto a lightly floured surface, divide dough in half. Working with one half at a time, roll into long rectangle, about 12×6 inches. Leaving a hlaf inch margin to make rolling easier, brush with about 2 tbsp milk or cream (you might not use it all, which is fine). Sprinkle liberally with cinnamon and about Â¼ cup sugar. The surface should be well coated.
Starting with a long side, roll up into a tight log, pinching along the seam to seal. Divide log into 6 rolls with a sharp kinfe, cutting every 2 inches, and place cinnamon buns swirly side up on a lined or greased baking sheet. Repeat with 2nd half of dough. Top each bun with about 1 tsp butter.
Bake at 375 for 20-24 minutes, until golden brown.
Drizzle with glaze (see below) while hot.

Stir together all ingredients in a small bowl, adding enough milk to make the glaze drizzle thickly but easily. Add a bit more sugar if you thin it too much, but it’s not an exact science, so I wouldn’t worry too much. It’ll taste good in the end no matter what.