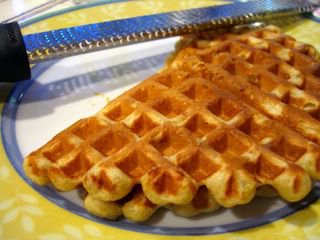 I was looking around various websites for waffle recipes when the idea of an orange flavor struck me (Gee, I don’t know why). This recipe on Mr Breakfast immediately appealed to me, since I love yeasted waffles. They are usually able to achieve a lightness that eludes waffles made with chemical leaveners alone, though I do like those as well. I had already decided on the recipe when I realised that it was vegan. Never having made vegan waffles before, I immediately wondered if they would produce a texture similar to, if not the same as, non-vegan waffles. Naturally, I didn’t hesitate to make them, since I’ve made many vegan baked goods that I’ve liked.

For a yeasted recipe, these are suprisingly quick to make. Once everything is blended, the batter needs to stand for only 30 minutes before it is ready. I did reduce the amount of flour called for slightly, because I was worried about the batter being too thick. The orange flavor was noticeable but not overwhelming. The waffles turned out to be fairly crisp on the outside and moist, though not dense, inside. While perhaps not as crispy as a batch made with lots of butter might turn out, they were very good. I’d definately make them again, possibly substituting some of the orange juice for lemon next time and stirring in some dried blueberries. My mouth is already watering.

Whisk together yeast and orange juice in a large bowl. Let stand for 10 minutes, until slightly foamy. Stir in the rest of the ingredients and let batter sit in a warm spot, covered with plastic wrap, for 30 minutes.
Heat waffle iron according to directions and cook waffles until they are golden brown and crispy (I would give more details, but every waffle iron is different). Serve immediately.
Makes 4-6 waffles, depending on the size of your iron.