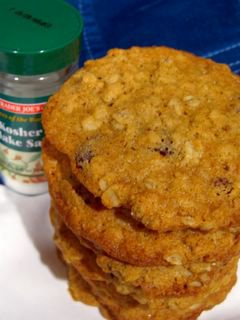 There was a great episode of Recipe for Success, a show on the Food Network, that featured the creator of a cookie called Salty Oats. They are oatmeal raisin cookies, sprinkled with salt, instead of having it mixed into the batter. Though the saltiness isn’t approaching levels to qualify this as a “salty snack”, it does bring it to the front of the palate, instead of simply using it to enhance the usual flavors. Salt fan that I am, I searched for a similar recipe and found DCist’s version of this unique treat.

The cookies were really quite good. They had a great flavor and were very chewy; the use of a bit of rice flour prevented the cookies from becoming cakey. Cathy can attest to the “crunchy, chewy, buttery and salty” taste and excellent ship-ability of these cookies, since I sent a few off to her last week. Don’t think that I was skimping by sending only a few: these cookies are huge.

I did change the method a bit, not refrigerating the batter before baking, so I ended up with cookies that were a bit flatter than DCist’s. Using a 1/4 cup measure for each cookie made for some very large snacks. I expected them to be a bit saltier than they were, based on the name. On the Food Network clips, it seemed like quite a lot of salt was being sprinkled on each cookie, but I haven’t had a chance to taste the “real” thing. Next time I’m back east, I’ll try and hunt them down, but I’ll probably make myself another batch or two in the meantime.

These are very impressive cookies at full size, but feel free to make these smaller, adjusting baking time accordingly.

Preheat oven to 375F. Line a large baking sheet with parchment paper.
In a medium bowl, whisk together rice flour and all purpose flour. Set aside.
In a large bowl, cream butter for 30-60 seconds to soften. Add brown and white sugars, baking powder, baking soda and cinnamon. Cream until mixture is very well blended. Add in eggs, one at a time, followed by vanilla extract.
With the mixer on low speed, beat in flour mixture. Stir in oats and raisins.
Drop dough, measuring with 1/4 cup dry measure, on to prepared baking sheet. Sprinkle cookies with salt, giving each cookie a light, but even, coating.
Bake for 12-14 minutes, until the edges are golden brown. Transfer to a wire rack to cool completely before storing.
Makes about 20 huge cookies.