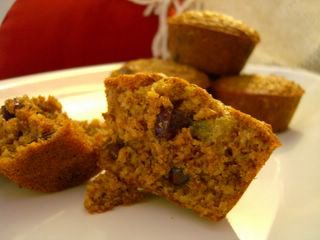 When the holidays come around, like many people, I find myself riding waves of excess. Specifically, excesses of sugar and salt. I don’t find that I have this problem when I am chiefly eating things that I have made myself, even when those things are cookies and cakes. Eating lots of very sweet things – like leftover Halloween candy – makes me crave salt. An excess of salt, in turn, makes me turn to sugar. As much as I love sugar and salt, I also occasionally like to take a break. I’m also not the only one who, on occasion, looks for something heathy in the mornings.

Oat or wheat bran muffins are a food with so much potential that often fall far below expectations. At their worst, they are dense, coarse, dry and flavorless. Their “best” is often moist to the point of stickiness or sweetness approaching that of cupcakes. A bran muffin should be slightly sweet, hearty and reasonably nutritious. The name certainly implies some degree of health, after all.

, which I just love and don’t use nearly often enough. His Whole Wheat, Oatmeal and Raisin Muffins seemed to fit the bill of what I was looking for. Though they are not quite bran muffins, they have whole wheat flour, wheat bran, oats and a fair amount of dried fruit. They are also reasonably low in sugar and fat, making them a good choice for a weekday. Best of all, perhaps, is the fact that the batter can be held in the fridge for at least a week, so there is no need to bake off the full batch at once. Mr. Patent does note that the top of the batter may darken after a few days in the fridge, so be sure to give it a good stir before baking.

Overall, the batter came together very easily. The use of oil instead of butter meant that there was no need for creaming or melting anything. I used a mixture of dried cranberries, cherries, blueberries and golden raisins for the fruit. Using a 1/4 cup measure, I spooned the batter into paper-lined muffin tins and baked. The muffins smelled just like oatmeal raisin cookies coming out of the oven. Not really suprising given the oatmeal, raisins and cinnamon in them. The recipe calls for resting the batter before baking, so I tested unrested and rested. The rested batter produced a higher rise and domed tops, while the unrested batter resulted in flat (but equally tasty) muffins.

The muffins were very tender and not greasy at all. The dried fruit gave every bite some sweetness, as the muffin itself did not taste either sweet or unpleasantly unsweetened; it had a fantastic balance. I am sure that you could add in a few toasted nuts, if you’d like, or use some fresh fruit in addition to dried. These muffins are something that you could actually serve to company, not something that you’re only eating with the justification that it isn’t too bad for you. I’ll definatley be baking these again.

Whole Wheat, Oatmeal and Raisin Muffins
(from Baking in America

Preheat oven to 375F. Grease a muffin tin, or line with baking cups.
In a large bowl, whisk together flour, wheat bran, sugars, baking soda, salt and cinnamon. Stir in dried fruit and oats. In a small bowl, whisk together egg, buttermilk, vegetable oil, vanilla and water.
Add buttermilk mixture to oat mixture and stir until just combined. Let stand for 15-20 minutes. You may refrigerate the batter, covered, for about a week at this point.
Spoon batter into prepared tins by heaping 1/4 cups (about 1/3 cup).
Bake for 20 minutes, until muffins are golden brown and spring back when gently pressed. Add 5 minutes baking time if batter is cold.
Makes 12 large muffins