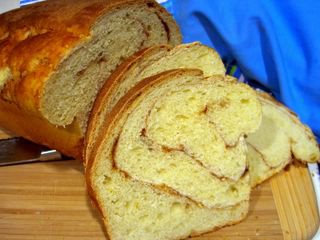 “What would a bread book be without a recipe for a sugar and spice swirl” asks Beth Hensperger, before sharing her recipe for Orange Cinnamon Swirl bread with the readers of The Bread Bible

. Ms. Hensperger’s book is her bread bible, containing 300 of her favorite recipes. The other

bread bible, by Nancy Silverton was published a few years after this one. I personally find the latter book to be good in terms of usefulness, but rather more intimidating. I really love Beth Hensperger’s recipes and have several of her other books, as well. She is talented – not just at baking, but at all types of cooking – inspirational and accessible. I definately recommend this book.

I haven’t made a simple swirled loaf before and I couldn’t resist the twist of orange that she added to this one.
Generally, I tend to want to make cinnamon buns or something if I am rolling bread up in a swirl. Since these generally come out well, I figured that I wouldn’t have too much difficulty with this week’s recipe. But this particular post serves as a good reminder that no matter how good you think you’re getting at shaping breads, there will always be room for improvement. In other words, when making a loaf that you want to hold its shape, make sure that you pinch it shut very well. I even put the seam side down and still had some slight malformation. No matter, though. It gives the loaves character.

I used freshly squeezed orange juice, though store-bought will be fine. Do be sure to include the orange zest, though. The dough was firm and easy to handle, after it came together very easily. I used slightly less butter than called for when adding my cinnamon layer, but brushed the rest over the tops of the loaves to make a lovely brown crust. Due to the inclusion of egg and butter, the bread was baked at a low temperature.

The really impressive thing about these loaves was the taste. A hint of orange, a hint of cinnamon and a slight sweetness worked perfectly with the soft, yielding texture of the bread. The final product tasted much richer than I had anticipated, since it has only a moderate amount of butter and egg for how incredibly good it tastes. It is satisfying on its own, makes killer toast and incredible french toast, particularly if you add an extra pinch of cinnamon to your french toast batter.

(from Beth Hensperger’s The Bread Bible

In a large bowl, combine water and yeast.
Let stand for 5-10 minutes, until foamy. Add milk, orange juice, sugar, butter, orange zest, eggs, salt and 2 cups flour and mix, either by hand or with an electric mixer, until thorougly combined.
Add in 1 cup flour and stir for one minute (use the dough hook from this point on if using a mixer). Add remaining flour 1/2 cup at a time until dough comes together into a firm ball and no longer sticks to the sides of the bowl. Turn dough out onto a lightly floured surface and knead for an additional 2 minutes, shaping dough into a ball. I used a bit more than 6 1/2 cups of flour, then worked in some more as I kneaded the dough.
Place dough in a large, lightly greased bowl, covered with plastic wrap, to rise until doubled, 1 – 1 1/2 hours.
——————-
Grease two 4×9 inch loaf pans with butter or oil.
Combine 2/3 cup sugar and 1 1/2 tbsp ground cinnamon in a small bowl.
Turn dough out onto a lightly floured surface and divide into two equal pieces. Working with one piece at a time, roll dough out into an 8×12 inch rectangle. It’s okay to approximate the size. Leaving a one inch border, brush dough with melted butter and sprinkle evenly with 1/2 cinnamon mixture. Starting with the shorter side, roll dough up tightly, pinching the ends and the seam together very well. Rolling with your hands on the edge of the dough will help maintain the shape of the bread as you roll it.
Place, seam side down, in one of the prepared pans. Repeat with remaining dough. Brush tops of loaves with any unused melted butter and cover loaves with plastic wrap. Let rise for 40 minutes, until about 1/2-1 inch over the top edge of the pan.
While loaves are rising, preheat oven to 350F.
Bake risen loaves for 40-45 minutes, until loaves have a nice brown top crust.
Turn out of pans immediately and allow to cool completely on wire racks before slicing.
Makes 2 loaves.