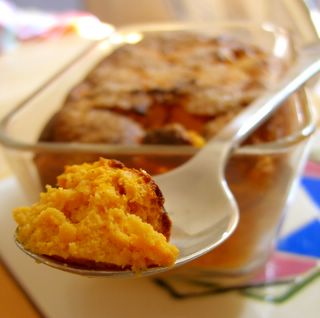 The brilliant theme of Souffles was chosen by our host, Kitchen Chick, for this month’s Is My Blog Burning event. Souffles are wonderful things and one of the few dishes that should really only be prepared inside the home, though of course, I would not refuse if the souffle is part of a tasting menu at the French Laundry.

A souffle is a mixture of egg whites and some sort of sauce or custard base. You can really souffle just about anything, though moister, softer things will make better souffles. Would you prefer a cheese souffle or a cracker souffle? Souffles are light and airy creations that get their structure from beaten egg whites. The protein in the egg whites forms pockets of air that, much like rising bread, expand when heated and give the souffle lift. Of course, egg whites are rather more delicate than the gluten in bread, so the temperature difference between the oven and your kitchen will cause the souffle to deflate. Souffles should be served immediately to preserve the look and their soft, fluffy texture.

What are, arguably, the two most common souffles? Cheese and chocolate. I make banana souffles often, too. None of that from me for this event. I wanted to be a little bit different and try out a few souffle ideas I had recently. I ended up with a whole day of souffles.

I started off breakfast with souffled oatmeal, since its creamy consistency made it a good candidate for souffle-ing. I had too high a ratio of egg whites to base here, so it was a bit lighter than I would have liked. The dish tasted fine, but I was left unsatisfied. The sugar topping that I sprinkled on before putting the souffle into the oven crisped wonderfully, though. No photo of this one. 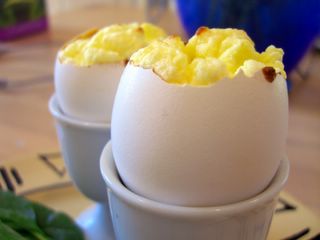 I remembered seeing tiny souffles in egg shells on an old rerun of Iron Chef, so I tried the same trick for lunch. Basically, I made a cross between scrambled eggs and bechamel and souffled it. I whisked together buttermilk, a bit of flour, egg yolks and salt and pepper, then folded in an egg white and piped the mixture into egg shells (On Iron Chef, they had a neat gadget that took the tops off eggs cleanly in a split second. I want one!). The little souffles were extremely tasty and the presentation was gorgeous. Served with a salad, I felt like I was at a little bistro. Perhaps it was a little time consuming for what it was, but I would consider making it again. 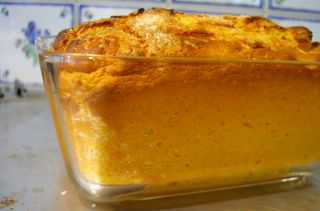 The final souffle is more of a side dish, though I ended up having it for dinner. It is a take on sweet potato casserole, though I made it substantially less sweet than most recipes. The texture was almost like a very moist and tender sponge cake and the bourbon gave it an addictive quality. I’m not sure if I loved it, but I couldn’t seem to stop eating it. Perhaps the sugar I sprinkled on top, which caramelised during baking, had something to do with it. This is definately a repeater and I might play around with sweetness and turn it into dessert!

Note: If you roast or microwave your potatoes, as opposed to boiling them, you may have less moisture, in which case add 1 tbsp more liquid. You may also substitute milk for the cream. I also used a 3-cup capacity dish for this souffle, but you can put this into individual ramekins and reduce the baking time.

Butter the sides of a 3-cup souffle dish, or an oven-proof dish with high, straight sides. Add breadcrumbs and shake to coat sides. Use a dish towel and remove any butter or crumbs from the top 1/2 inch of the dish, to ensure a straight rise.
In a food processor, blend potatoes, sugar, spices, buttermilk and light cream/half and half, brandy and egg yolk until very smooth.
In a large bowl, beat egg whites until they reach soft peaks. Add potato mixture to egg whites and fold together until the mixture is uniform and well-combined.