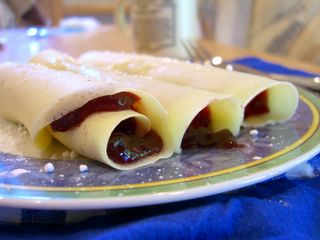 I have been meaning to experiment with alternative flours for some time. Anything from rye to buckwheat to rice to mesquite. Did you know that your can actually make some rather strange types of “flour”? To make pumpkin flour, for example, all you have to do is dry/dehydrate pumpkin and then puree it into dust. Now, I couldn’t find a single recipe that told me exactly how to dry out my pumpkin, so I supposed I’ll have to hold off on that. Using flours other than wheat can dramatically change the taste and texture of your baked goods. For example, adding a tablespoon of instant mashed potato – aka potato flour – to your bread will make it a bit moister than usual.

Never one to go only halfway (well, maybe sometimes), I went out and purchased a bag of white rice flour and plunged headlong into an attempt at gluten-free baking. Not because Shauna guilted me into it. No sir.

Did you know that 1 in 133 Americans are gluten intolerant? I tried some of the recipes on the back of the bag of flour, too, and discovered that a major concern of the manufacturer is sugar content. Let me tell you that a nearly unsweetened muffin, no matter what kind of flour is used to make it, is not a muffin that I want to eat. Fortunately, I didn’t have to, since I filled up on crepes before I started baking.

Tender, tasty and a bit thicker than your typical crepe, I liked these a lot. You can see from the photo that I made them in a nonstick pan; if I had greased the pan with butter, they would have browned a bit more. They held up well to jam (my favorite on crepes), but you could easily smear them with nutella or wrap them around sausages and dip in maple syrup. And they’re gluten free, so you can share the recipe with your Celiac friends.

In a medium mixing bowl, beat together all ingredients until smooth. Pour, using a 1/4 cup measure, into a medium-sized, hot, nonstick (or greased) skillet. Turn skillet to thinly, evenly distribute batter in a circle. Cook for about 30 seconds per side.
Spread with jam, nutella or simply butter and sugar, roll up and serve immediately. You can also roll these around breakfast sausages to make pigs in a blanket.
Makes about 8 crepes
Serves 2-3, depending on hunger and fillings.