Ordinarily, I would make ribs in the oven. They would be seasoned, sauced, wrapped tightly in foil and baked long hours at a low temperature until the meat was falling-off-the-bone tender. I am not thrilled with the heat that this generates in my kitchen, butt the only real problem I see with this method is that it renders my oven unavailable to other baked goods. I like to have cornbread with barbeque and it just doesn’t turn out quite right when you try to bake it in a 250F oven.

To free up that valuable oven space, I used my crockpot. I have a 5 quart slow cooker (crockpot), so I used 4 pounds of baby back ribs. If you have a small one, use two. This is important because the sauce will scorch a bit if you are not filling your cooker with enough meat. And who ever complained about a few extra ribs?

I was incredibly pleased with how well these turned out. I needed two spoons to get the ribs out, rather than tongs, because the meat came off the bones as though it had never been attached. And the taste? Teeth were completely unnecessary.

I started with a recipe from Epicurious for barbeque sauce and altered it a bit according to the comments left by other users and my own tastes. The sauce was on the sweet side, but the paprika and dash of red pepper flakes cut it just enough. It was great with the ribs. You could taste many flavors in the sauce, and while you can taste a hint of root beer if you know it is there, no one else is likely to guess the “secret ingredient”. If you don’t have root beer, substitute some brand of cola. I like the sauce to be a little thinner for roasting and crock pot cooking, as opposed to grilling, where I like it thick. If you like it thicker, continue to reduce the sauce down to 1 1/2 cups, which will take an additional 10-15 minutes.

Whisk all the sauce ingredients together in a medium sauce pan. Bring to a boil over medium heat, then simmer, stirring occasionally, for about 10 minutes. This will reduce the sauce to about 2 cups. Set aside.
This sauce can be made ahead and kept in the refrigerator.

Remove fatty membrane from the underside of the ribs. Rub the meat with salt and pepper.
Pour 1/2 of the sauce into the bottom of the slow cooker (aka the crock pot). Add ribs and coat with remaining sauce.
Cook on low setting for 6-7 hours. 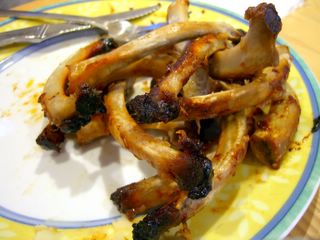