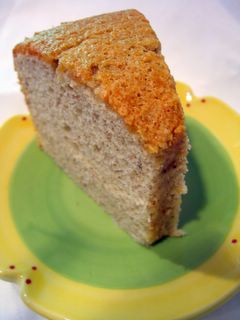 Chiffon cake is a foam cake, similar in appearance to an angel food cake, but more similar in construction to a sponge cake. Angel food cakes contain no fat and derive their moisture from the sugar content of the cake and proper handling of egg whites. Sponge cakes get their leavening from beaten eggs and do not contain added fat. Chiffon cakes contain both egg yolks and vegetable oil. They have chemical leavening for extra lift, but also have beaten egg whites folded into the egg yolk/oil batter to achieve a lovely, light texture. Vegetable oil keeps this light cake moist and soft for several days after baking.

Chiffon cake lore states that in 1927, a Los Angeles baker, Harry Baker, invented the original chiffon cake. It was light, airy and a huge hit with the stars in Hollywood. He kept the recipe a secret for 20 years before selling the recipe in 1947. Chiffon cakes were introduced to the American public by Betty Crocker (aka General Mills) in 1948. Chiffon cake became the most stylish cake of the 1950s and into the 1960s – which should be no suprise, given it’s star studded Hollywood origin. It’s also very impressive looking, not too sweet and quite tasty.

They are baked in a tube pan, much like angel food cakes, and must be cooled upside down to prevent collapse. The cakes are traditionally turned out, upside down, onto a cake stand and covered with glaze. Citrus flavors are the most popular and most traditional for chiffon cakes, though they can be made in just about any flavor. It is here I broke with tradition and found a banana flavored recipe. Not only did I use bananas, I used non-trational red bananas. Feel free to use regular bananas for this recipe, though.

I love making foam cakes and this one was no exception. It could have been a bit higher because I inadvertantly only used 5 egg whites instead of the 7 called for in the recipe. Because I used freshly ground nutmeg, I used much less than called for, perhaps about 1/8 tsp, and the flavor still came through. The batter came together easily, the cake cooled overnight and I had some with my coffee in the morning. I did not glaze the cake, but a simple chocolate or caramel glaze would be excellent with this recipe. I really enjoyed the banana flavor of the cake, which was perfectly complimented by the cinnamon and nutmeg.

Preheat oven to 325F.
Sift cake flour, 1 1/3 cups sugar, baking powder, salt, cinnamon and nutmeg into a large mixing bowl. Mix egg yolks, banana, vegetable oil and vanilla together in a small bowl. Pour banana mixture into flour mixture. Stir to combine and set aside.
In a medium mixing bowl, beat egg whites until foamy. Add in remaining 2 tbsp sugar. Continue to beat to soft peaks. Using 1/3 of the egg mixture at a time, gently fold beaten egg whites into banana mixture until batter is uniform in color. Pour batter into an ungreased, 10-ingh tube pan. Gently tap the side of the pan once or twice to eliminate any large air pockets.
Bake for about 50-55 minutes, until the top springs back when gently pressed. If it is not done, a small indent will remain on the surface of the cake where you poked it. Return to the oven for 2 more minutes and check again until done.
Invert pan over a wine bottle or cooling rack until completely cool, 3 hours or overnight. When cool, carefully separate the cake from the pan with a thin knife and invert onto a serving platter or cake stand. Glaze as desired.
Serves 12-14