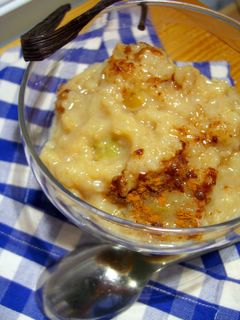 I don’t know about you, but when I make rice I often season it or cook it in chicken or vegetable stock instead of simply cooking it plain, in water alone. I also don’t usually have too much rice left over at the end of a meal. This is a problem because I like rice pudding and it seems that most recipes call for starting with leftover rice.

Rice pudding is, in its simplest form, a dish of cooked rice, thickened with milk or cream and sweetened with sugar. In more complex forms, it is enriched with egg yolks and studded with fruits and nuts. I think of classic comfort food, something that you might eat when curled up by the fire on a wintery night or have as an indulgent breakfast treat, cold from the refrigerator, at your grandmother’s house. In fact, I can’t remember ever making rice pudding, just eating it. And my grandmother picked it up at the store.

The recipe I used was from Retro Desserts, by Wayne Harley Brachman. I had a few problems with his method. Essentially, you cook the rice in caramel, add milk and bake until thickened. Mr. Brachman says to cook the rice, in the caramel, with the saucepan lid on. Mine bubbled over. Twice. Needless to say, I left the lid off after that. I also decided that baking the pudding was not strictly necessary, not to mention that there would be less cleanup if I added the milk straight to the pan.

All in all, the pudding was delicious. The light brown color came from the brown sugar. If you soak the raisins in run, you’ll get a nice, adult flavor, but it’s not necessary and I think I actually prefer it without. Any type of milk will work in this recipe, but light cream will give you the creamiest, most decadent results.

Combine rice, brown sugar, water and vanilla bean in a medium sauce pan. Bring mixture to a boil, then reduce to a simmer until all the liquid has been absorbed, about 45 minutes. Carefully remove vanilla bean. Scrape out the seeds and stir them into the rice.
Stir in cream and, keeping rice over low heat, bring to a simmer. Remove pudding when it begins to bubble, after 20-30 minutes. Stir in raisins. Transfer pudding to a medium bowl or individual serving dishes, sprinke with cinnamon. Refrigerate until chilled and ready to serve.
Serves 6.