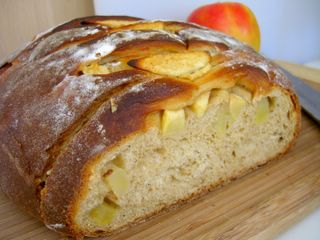 While I am a dedicated coffee drinker, I do love tea. One of my favorite coffee shops, The Coffee Bean and Tea Leaf carries over 40 original tea blends, one of which I picked up the very day that IMBB #17: TasteTea was announced by Clement of A La Cuisine!: Pomegranate Blueberry Tea. This tea makes a fabulous iced tea because it is a black tea filled with dried fruit. The natural sweetness really shines through when you brew it. I thought this was a sign that I was meant to use it for my entry. Alas, it was not to be. The tea, while lovely, is just a tad too fruity for what I had in mind.

Instead, I decided to use Stash Double Spiced Chai tea to make a tasty apple bread. I added powdered milk because I wanted the added bit of richness but didn’t want a milk flavor to overwhelm the tea, though this is a particularly spicy tea and I think it would have been fine.

Mix yeast, tea and 1 cup of flour in a large bowl. Let stand for 15-20 minutes, until foamy and the mixture has risen a bit.
Stir in powdered milk, cinnamon, salt, sugar and 1 cup flour. Add remaining flour gradually until the dough comes together and pulls away from the side of the bowl. Transfer dough to a floured work surface and knead until smooth and elastic, about 5 minutes. Place in an oiled, covered bowl and let rise until doubled, 1 1/2 hours.

Meanwhile, combine apples with 1 tbsp brown sugar in a small bowl.
Once dough has risen, flatten in gently onto work surface. Place apple mixture onto dough, reserving the apple slices. Knead apple pieces into dough gently, giving the bread about 4 turns. They will look almost ready to poke through. Shape into an oblong loaf and place on a cornmeal dusted baking sheet. Make 6 or 8 small slashes across the bread and tuck one apple slice into each one. Allow bread to rise until nearly doubled, 1 hour.

Preheat oven to 400F.
Bake bread for 30 minutes, until the bottom sounds hollow when tapped and the loaf in nicely browned. If it starts to get too dark on top, just cover the bread loosely with a bit of foil.
Allow to cool on a wire rack before slicing.