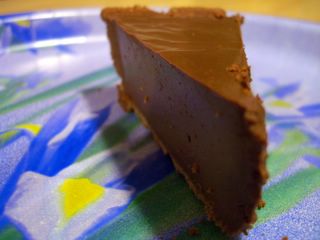 In a bit of a twist this week, the recipe I’ve made came from Good Eats, Alton Brown‘s TV show, instead of a cookbook.
In every episode of Good Eats, AB picks an ingredient or a cooking method and explains and investigates it in depth. He will cover great recipes and great techniques, even including which gadgets to use and why. He will also include lots of historical and scientific information related to the topic at hand. All this is done with a sense of fun in an entertaining production that takes food television why beyond the average cooking show. I’m a big fan. If the show is aired in your area, check it out.

Some time ago, I caught an episode about Tofu where Alton Brown made a chocolate tofu pie. I was led to believe that this episode would rerun this week, but it did not and thus I was unable to refresh my memory of the show. Fortunately, Traditional chocolate pies often contain lots of cream and several eggs. They taste great, but waistband-friendly, they are not. It’s a very simple pie that is much healthier than your typical chocolate pie because tofu takes the place of cream and eggs.

My only complaint with the recipe is that it calls for “a block” of silken tofu. I have several blocks of tofu in my fridge which varied in size from 6-14 ounces. I used a 12 ounce block. I had to scrape down my food processor several times while making the filling because nothing would look worse than a chunk of pale white in a slice of dense cholate pie.

Perhaps I should have titled this post “How to trick your friends into eating tofu” because my tasters (and coworkers) loved this pie. It was dense. It was creamy. It was chocolatey. It was great! I though detected a subtle soy taste, but that could have been my imagination as no one else appeared to notice anything. I did use a store bought chocolate graham cracker crust for this recipe rather than making one. I think a graham cracker crust provides a nice textural contrast for the filling as well as adding sweetness to the dish.

I prefer to call this Chocolate Silk Pie, versus the original title of Moo-less Chocolate Pie, both because it describes the pie to the people you serve it to and because it’s a cute reference to the silken tofu in the filling.

Place tofu and honey into a blender or food processor.
Melt chocolate chips and coffee liquor together until smooth in a double boiler. Remove from heat and stir in vanilla. Pour over tofu and whizz/blend the mixture until completely smooth, stopping to scrape down the sides of the bowl occasionally.
Pour into a pie crust and chill until firm, at least 2 hours.