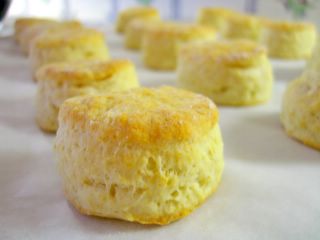 Not being from the South, I will state that I am not an authority on biscuits. In fact, most of the biscuits I have eaten in my life have been the kind you might find in the refrigerated section of the market. I probably have never had an authentic Southern biscuit. They look tasty, though, so I set about to make some.

If you have no idea what I’m talking about, you’re probably not reading this from inside the US. Biscuits are small, round breads that have fat cut into the flour and are leavened with baking powder, similar to scones. They are flakey, light in both texture and color and have a golden brown top. Traditional biscuits are rarely sweetened prior to cooking and are served as a savory side dish or are eaten with butter and jam.

The ingredients are simple: flour, leavening, salt, fat and buttermilk. A more traditional southern recipe, as pointed out by Alton Brown’s recipe, calls for White Lily flour, low gluten, self rising flour originating in the southern US. All purpose flour, being more widely available, is what I used. I rubbed in the butter, leaving some the mixture looking fairly coarse, with chunks of butter as when I make pie crust, and stirred in the buttermilk. The dough was sticky. I used lots of flour when handling it as I rolled it, kneaded and folded it in half several times – 5 or 6 six. I was careful not to twist my biscuit cutter (flouring it liberally instead) so my biscuits would rise straight and high. The final biscuits were noticeably flakey. I think that the repeated rolling and folding of the dough that A.B. mentioned actually did help create a flakey final product. I was very pleased. I skimped a bit on the salt as I mixed my ingredients, but using salted butter when eating the finished biscuits made up for it.

My final recipe is a hybrid between Alton Brown’s recipe and a recipe from Southern Living magazine.

Preheat oven to 400F.
Whisk together flour, baking powder, baking soda and salt. Rub in butter with your fingers until mixture resembles coarse crumbs of varying sizes, but none larger than a pea. Stir in buttermilk until dough comes together.
Turn dough out onto floured surface and knead or roll out until dough has been folded 4 or 5 times. Roll dough out until it is 1 inch thick. Using a 1 1/2 – 2 inch round cutter, push straight down through dough (do not twist the cutter!) and place biscuit on a parchment lined baking sheet. Repeat. Any biscuits made from the scraps will not be quite as flakey as the first pass, but will still be good.
Brush biscuit tops with buttermilk and bake for 15 minutes, until tops are a light golden brown.
Makes 12-16 biscuits.