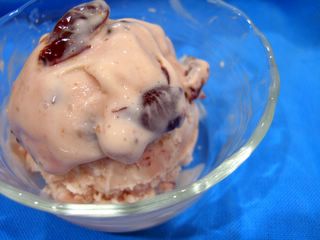 It’s Independence Day here in the US and that means barbecues and fireworks. It also means that it’s summer, so I made a great, healthy frozen dessert: Black Cherry Frozen Yogurt. Incredibly creamy and delicious, without leaving that lingering cream taste that some ice creams do. The best part is it’s fat free, except for the few mini chocolate chips I added, but who counts something to tiny anyway. I want to make more of this every day. Maybe not with the same fruits, but it’s that good.

Several weeks ago, I saw a rerun of an episode of the Barefoot Contessa, Ina Garten‘s cooking show. She had Patricia Wells as a guest and they made frozen yogurt from scratch. The thing that stuck in my mind was the fact that the recipe was very simple. Also because, unlike many of Ina’s recipes, it didn’t involve a lot of butter. As much as I love making things like sorbet, you really have to plan ahead so the base can chill before you freeze it. For this recipe, you beat egg whites with sugar, folded it into yogurt and froze it.

Now I did not attempt to write down the recipe or the directions during the show. The recipes are posted online, so I assumed I could look it up later. Unfortunately, FoodTV informed me that this recipe had expired. Expired? I didn’t know that was possible! I set about to find the recipe and, after a long hard struggle, I located it.

This recipe is dead easy, especially if you know how to beat egg whites and own an ice cream maker. If you don’t own one? Buy one! They’re not that expensive and they’re worth it. I have this one, which is available used for $25! I added frozen cherries and a handful of mini chocolate chips, but feel free to substitute any thing you’d like. I wouldn’t recommend using any more than 1 cup of add-ins, though, as I think that might inhibit the churning process.

I used Fage Total Greek yogurt, which is much thicker than ordinary yogurt because it is strained. I recommend draining your yogurt in cheese cloth for a bit to thicken it, but this is clearly not entirely necessary because the original recipe did not call for this.

2/3 cup sugar (castor or superfine, if you have it)

Whisk vanilla into yogurt until it is smooth and set aside.

Beat egg whites until frothy, add sugar gradually and continue beating at medium-high speed until you have soft peaks, 4-5 minutes. Do not overbeat.

Fold yogurt into egg whites in 4 additions, making sure it is well incorporated. Fold in cherries and chocolate chips and pour mixture into your ice cream maker. Freeze as directed and store inan airtight container in the freezer if you are not going to eat it right away.