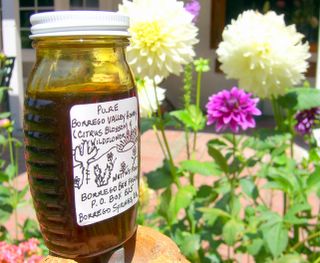 Sugar High Friday is a monthly blogging event created by none other than The Domestic Goddess, Jennifer, a few months back. It is my absolute honor to be the host for this month and my pleasure to announce that the theme is Honey.
Honey is a sweet, golden liquid produced by bees from the nectar of various flowers. Honey was probably the first sweet discovered by humans that wasn’t some form of fruit. Its use was extensively documented in ancient Egypt, both as a treat for people and as a food for sacrificial animals. Many varieties of bees produce wildly different honeys all over the world. There are even single origin honeys, all from only one type of plant or flower. These can be created by meticulous bee keeping or by keeping bees where there is naturally limited flower selection. The honey pictured above, for example, is produced from desert wildflowers and citrus in the Anza-Borrego Desert.
Honey is a great natural sweetener – but is quite a bit sweeter than sugar, so it does not always work to substitute 1:1. Honey is also a great preserving agent, keeping goodies moist long after they have been baked. I personally like to use it as a topping for crumpets. How can you not love anything that fills up all those little holes?
So go ahead and pick out a recipe that uses or features honey. With a few thousand years of documented use, I don’t think anyone will have trouble with this one, though narrowing it down may be a challenge. Write up what you made and post it to your blog on Friday, July 15th. Feel free to include recipes and photos. We’re all secretly doing this for the food porn.
E-mail me with a link to your entry and I’ll get the roundup out by Sunday. For those you you who don’t have a blog, you can e-mail me your entry and I’ll put it up here.

‘”Well,” said Pooh, “what I like best — ” and then he had to stop and think. Because although Eating Honey was a very good thing to do, there was a moment just before you began to eat it which was better than when you were, but he didn’t know what it was called. ‘ Winnie the Pooh in A.A. Milne’s ‘The House at Pooh Corner’

Blogging By Mail: Opening the Packages (A roundup)