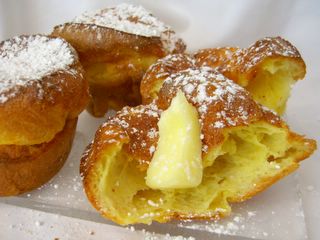 I like popovers. I like the way they’re crispy on the outside and custardy on the inside. They take almost no time to make and look impressive.
I used this recipe from Epicurious and added 1 tbsp of lemon zest and 1 tsp vanilla. I think the lemon flavor would have been even more pronounced with a tablespoon of lemon juice, or a bit of lemon oil, added as well. I would definately experiment a bit if I were after a really powerful lemon flavor.
Be sure to butter the muffin pan really well, because popovers stick like crazy. Also, if you poke a knife or skewer into the top of each popover halfway through baking, some of the steam will be released and you’ll end up with a crisper shell and a popover that won’t deflate.

Preheat the oven to 450F.
Heat a 6-cup muffin tin, greased well with the melted butter, in the oven for 5 minutes while you mix the batter.
In a large bowl, whisk together the eggs, milk, vanilla and zest. When smooth, whisk in flour and salt.
Remove heated muffin tin from oven and quickly divide the batter into the muffin cups. Bake for 20 minutes at 450F, then use a sharp knife to poke a small hole in the top of each popover to release steam and prevent them from deflating and reduce oven heat to 375F. Bake for an additional 15 minutes, until golden brown and crisp.
Makes 6 popovers.