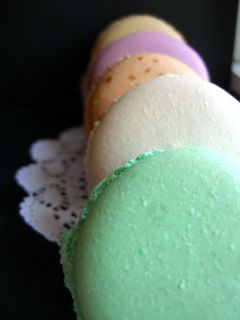 I don’t ordinarily review restaurants or anything here on my blog, but this bakery is worth a mention. The first thing it has going for it is location. Up until today, I was not aware of any decent bakeries near me. I know a good place for challah and a good place for donuts, but beyond those things, I would have to face traffic and trek further into LA. This is not always an appealing thought if all you want is a cookie or a baguette.

The second thing, and most important, is that the pastries I tasted were great. Everything else looked equally good.
L’Artiste Patisserie opened fairly recently and yesterday was the first day I stopped in there. It had gotten a mention on Chowhound, which is how I learned about it. I went around lunch time and there were about 8-10 people seated in the patio area eating sandwiches and other lunch offerings. Inside, there were two pastry cases: one with breads and morning pastries and one with cookies and desserts. I decided that I would go back for bread another time and treated myself to a few macarons and an espresso chocolate chip cookie. 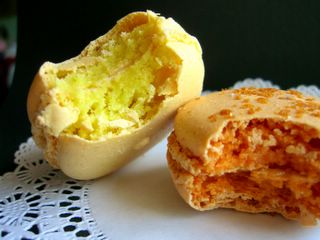 The pistachio and lavender had excellent flavors, though the lavender was not as crisp as the others. I suspect that some of the locals might be intimidated by a lavender cookie, as mine was clearly the only one sold from that variety. It just didn’t seem quite as fresh. At first I didn’t think that the vanilla had much flavor, but after taking a break from the other flavors to cleanse my palate, I found the flavor to be very nice. There were also coffee, chocolate, hazelnut and raspberry flavors available.

The espresso chocolate chip cookie was praised on the Chowhound boards and it, too, was excellent. It was very rich and chewy, a brownie held together in cookie shape. It didn’t have a coffee flavor, but the intensity of chocolate that has coffee added to it. 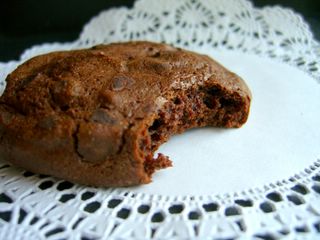 I’m going back soon to try the breads and other offerings which include brioche, baguettes, scones, muffins, monkey bread, cinnamon rolls, coconut cake, florentine bars and fruit tarts. They also serve breakfast and lunch, but I’m not sure if they’re open for dinner. I am so pleased to find a nice french bakery/cafe nearby! And with macarons!
C’mon LA food bloggers (and non-bloggers, too, of course!) – try it and let me know what you think!

One Day Foodie Tour of Montreal

Loco Moco and Joe’s on the Green, Poipu