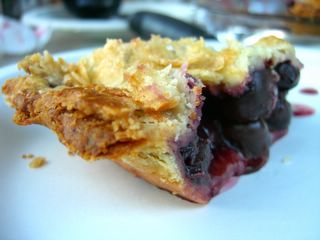 I learned a few things about cherry pie yesterday.

First, my crust was incredibly flakey and browned very well with an egg-white wash and generous sprinkling of coarse sugar. Second, frozen cherries work very well when you don’t have time to pit 2 pounds of fresh cherries. I used sweet cherries and reduced the sugar called for by most recipes from 1 cup to 1/2 cup. I wouldn’t have wanted it any sweeter because that might have overwhelmed the pie, not to mention the lovely hint of almond contributed by 1/2 teaspoon of almond extract.

Third, I believe I now know why it is recommended that you use tapioca starch as a thickener in berry fillings. I used 3 tablespoons of cornstarch, which did a fairly good job of creating structure in the pie. I would have perfered the slightly stronger thickening power of tapioca, though. I don’t want to spoon excess juice out of the leftover slices of my pie to make sure the crust stays flakey. Of coure, I also don’t want to have an artificial gel to the pie filling, so I’ll take the extra juice in favor of flavor and texture when it comes down to it.

I also learned that I like cherry pie much more than I ever remembered.

What is a bench scraper?