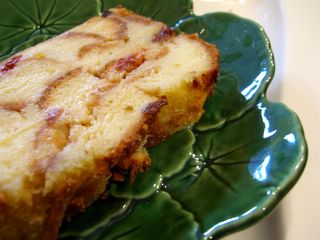 Most home cooks will make bread pudding in some variety of casserole dish, producing a relatively flat, custardy dish that must be scooped onto plates. In a restaurant setting, the presentation of an unformed blob on a plate is somewhat less than appetising. Consequently, restaurants will often bake bread pudding in a loaf pan, so it can be easily and attrictively plated. I first heard this in class when we were working on custard based desserts, and it definately makes sense to me. No one wants to pay for unattractive food. If it tastes good, people will consider it. But they’ll be bitter.

So, I baked this loaf-style bread pudding for Mother’s Day because my mom loves custardy desserts. I used challah and slightly lightened the original recipe, which used heavy cream and whole milk while I used half-and-half (half cream, half milk) and low fat milk. Bread pudding is a great way to use up bread that is getting stale. Or cream that you have lying around.

This recipe makes a dense and custardy pudding that is just sweet enough. It’s not too heavy because the eggs provide just enough lightness. Use enough bread to completely fill your loaf pan. You can use any type of dried fruit. I think that dried cherries pair really well with vanilla and I added some currants for variety. If you’re going to soak your fruit in brandy, as I did, as little as 30 minutes will work.

Preheat oven to 375F. Grease a 9×5 inch loaf pan well, but do not flour it.
In a large bowl, beat together milk, cream, eggs, sugar, cinnamon, zest and vanilla. Add bread and press it down to absorb all the custard. Stir in cherries.
Pour into prepared pan and sprinkle top of loaf with 1-2 tbsp sugar.
Bake 50-55 minutes, until a knife inserted into the center of the loaf comes out clean and the top is golden brown.
Allow to cool in pan and then transfer to a plate for serving.
It is best slightly warmed, but should be stored in the refrigerator.
Serves 8-10