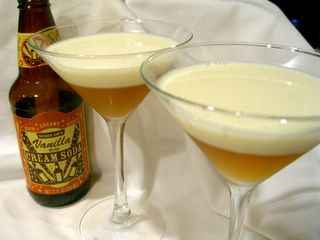 Thank you elise for picking such a great theme. Gelatin really set me off on a series of recipes that I wouldn’t ordinarily have made. Beyond making Jello as a child, rather poorly, I might add, I had no experience with gelatin before this event. I seem to be a bit hooked at the moment, though. Gelatin is very easy to work with and can be mixed with just about any liquid to make an easy, light jelly or mousse.

While scouting for appealing recipes, I came across a recipe on the Food Network website for Root Beer Gelee and Vanilla Panna Cotta. I love root beer floats and that is what came to my mind immediately when I saw their photo. How could you not love a tall glass of cool root beer poured over a big scoop of vanilla ice cream? I imagined that the combination of panna cotta and root beer would be similar in flavor. It turned out to be a great combination.

Unfortunately, I had no root beer and used vanilla bean cream soda instead, as you cen see in the photo, so this is not actually a root beer float. I really enjoyed this dessert, though, and think that it would have been fantastic with root beer. Root beer has a stronger flavor than cream soda and, though the vanilla melded well with the panna cotta, I think something slightly more assertive would have been more interesting.

It didn’t take very long to set the gelatin, but do be careful when pouring in the panna cotta layer. I would advise you to pour it down the side of the glass to avoid putting pressure on the surface of the root beer layer. You can leave it in your fridge for quite some time before serving, but because the panna cotta layer is not so thick, I would suggest letting it soften slightly at room temperature for 10 or 15 minutes before serving.

Sweets for the Super Bowl

Baking Bites for Craftsy: How to Make Eclairs