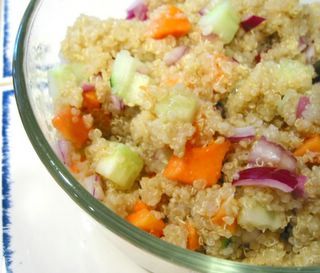 Cooking with unfamiliar ingerdients can be a challenge since you don’t know what to expect. Perhaps there will be unforseen complications in the cooking process. More common, at least for me, is the fact that it can be difficult to season something when you don’t know what it’s natural flavor is. You can always slather on some sort of thick, cheesey sauce, but if you’re planning on doing this you would be better off not bothering to use any unsusal ingredients because you won’t be able to taste them anyway.
Quinoa, pronounced “keen-wa”, is a south american grain. You can read more about it here. I had never cooked it before and bought it more or less on impulse. I didn’t really know what to do with the small, hard grains that resembled a cross between steel cut oats and couscous. I decided that a warm salad would be the best option since it would allow me to taste the quinoa relatively plain.

Quinoa turns out to be very simple to prepare. Boil one cup of quinoa in 2 cups of water. Reduce heat to a simmer and cover until liquid is absorbed, about 15 minutes. I don’t know if you can see in the photo above, but the grains sort of open an unwind as you cook them. I tossed it with cubed red onion, cucumber, papaya and salt and pepper to make a very simple warm salad. It turns out that quinoa tastes a lot like nutty brown rice, but with more of a creamy texture. Next time I’ll do something more interesting with it, but I’m glad to say that there will be a next time.