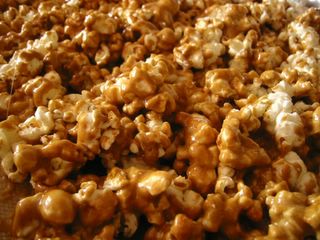 I am not going to go on about how great a theme caramel is for this month’s Sugar High Friday, hosted by Debbie at Words to Eat By. Instead, I will just cut to the chase: I made vanilla caramel popcorn.

The inspiration for this recipe was twofold. First, I felt like having some popcorn. Second, I’ve had caramel on the brain while thinking of all the possibilities for SHF and shopping for Easter goodies. Caramel corn was the logical union of the two. I also wanted something I could ship off to relatives as an Easter goodie, but that was more of an afterthought than inspiration.

I found this to be a bit tricky, given that I have no previous experience with candy making. Fortunately for you, this means that I think I can forwarn you of any problems so that they can be avoided easily.

Â I used a bag of microwave light butter (94% light, I believe) popcorn. Popped it and poured it out of the bag to cool. I munched on some and measured out between 8 and 10 cups, enough to fill the bottom of a 15×10 baking pan, which I lined with a Silpat. You’ll want to use two pans if you don’t have one this big. I transferred the popcorn to a large glass bowl, thinking that it would be easy to stir in the caramel this way and went to work on the caramel itself.

I combined the sugar, corn syrup and butter in a medium saucepan and tossed in a bit of molasses for extra flavor. Honey would be equally good. I boiled it to hardball (250F) without incident. I premeasured the salt and baking soda into a little dish, but didn’t bother to measure out the vanilla, figuring that I would just pour in a teaspoon with the salt and soda. I didn’t realise that the caramel would foam like crazy when I stirred in the baking soda, and I was so startled that I added way more vanilla than I meant to (hence the tablespoon, rather than a teaspoon in the recipe). No biggie, I figured and poured the caramel into the popcorn bowl where it almost immediately hardened. I should have warmed the bowl in the oven first! I managed to extract most of the popcorn onto my baking sheet and popped it in the oven for an hour. The caramel softened nicely and I was able to spread it out again.

After an hour, I took the corn out, let it cool and broke it into pieces.
Tasters said that it was better and crispier than anything they’ve bought in a store. They also reported that it was very light; no pieces were too hard and there wasn’t too much caramel. The entire batch was virtually inhaled, in large part by me.
In two words?

Pop corn and let cool. Line a 10×15 pan with lightly greased foil or a Silpat. Preheat oven to 250F. Place glass bowl in oven to warm while making the caramel.
In a medium saucepan, combine sugar, corn syrup, molasses and butter; bring to a boil over medium heat. Cook until the mixture reaches 250F and is at hard-ball stage (I double checked with a candy thermometer). This will take 2 to 3 minutes.
In the meantime, transfer popcorn to now-warm glass bowl.
Remove pan from the heat and immediately stir in salt, baking soda and vanilla. Pour the mixture over the popcorn, stirring until most of the kernels are coated. Pour mixture onto baking sheet.
Bake popcorn for 1 hour, stirring (and if necessary, spreading out) every 15-20 minutes.
Let cool and break into pieces. Store in an airtight container